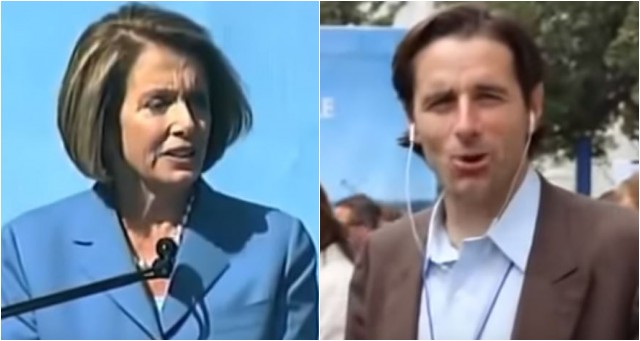 They sure covered this one up quickly!

Now Nancy Pelosi’s son may be looking to take center stage with the Ukraine controversy.

“BOOM: Nancy Pelosi’s son Paul Pelosi Jr. (who went to Ukraine in 2017) was a board member of Viscoil and executive at its related company NRGLab, which DID ENERGY Business in UKRAINE!

And Nancy Pelosi appeared in a promotional video for the company!”

What in the hell?

BOTH Biden’s and Pelosi’s sons have strong ties to Ukraine?

Who goes to Ukraine?

I’m sure most people reading this have sent their sons to Ukraine at some point.

(Washington Free Beacon) The Securities and Exchange Commission (SEC) charged a company co-founded by Paul Pelosi Jr. with fraud on Wednesday after learning that two convicted criminals were running the business.

The SEC charged four individuals with fraud, including former New Mexico Gov. Toney Anaya, and suspended trading in the company’s stock. Pelosi owned over 10 million shares in the company in 2009.

She SEC said Wednesday the company was “secretly controlled” by James E. Cohen and Joseph Corazzi, both of whom had previous fraud convictions.

The SEC suspended trading in Natural Blue stock. A notice filed in the Federal Register on Wednesday by Jill M. Peterson, assistant secretary of the SEC, revealed that the company has not filed any periodic reports, which are required by law, with the SEC in four years.

“It appears to the Securities and Exchange Commission that there is a lack of current and accurate information concerning the securities of Natural Blue Resources, Inc. because it has not filed any periodic reports since the period ended September 30, 2010,” Peterson said, in the order announcing suspension of trading.

The Free Beacon reported that Pelosi was still listed with The New Mexico Office of the Secretary of State Business Service Division as the president of Natural Blue at the time it filed the report.

The New Mexico Office of the Secretary of State Business Service Division had designated Natural Blue as a company “not in good standing.”

From Patrick Howley at National File:

House Speaker Nancy Pelosi’s son Paul Pelosi Jr. visited Ukraine in 2017 to meet with government officials in connection to a business initiative. Now, unearthed records reveal that Paul Pelosi Jr. was an executive of a gas industry company that did business in Ukraine – and his mother Nancy Pelosi was featured in one of the company’s promotional videos.

Paul Pelosi Jr. travelled to Kiev, Ukraine in July 2017 in his capacity as executive director of the Corporate Governance Initiative, a position that he accepted months earlier in February 2017. Pelosi Jr. said that he was in Ukraine to discuss a youth soccer partnership with the government.

The American Mirror, which flagged Pelosi Jr.’s appearance in 2017, preserved a clip of Pelosi Jr. on the Ukrainian station following the video’s removal from YouTube.

On March 5, 2013, NRGLab New Technology posted two videos on Youtube. One video opened with a clip of Nancy Pelosi discussing energy-efficient technology, followed by a direct-to-camera statement from her son Paul Pelosi Jr., filmed in Washington, D.C. in 2010.

“My name’s Paul Pelosi. Of course I’m on the board of Viscoil. And Viscoil is here today to talk about accelerating the future. It’s about using cars in a more efficient manner. It’s about utilizing natural resources, whether it be electricity, or gas, or fossil fuels in a more efficient way. And Viscoil is a part of that solution,” Paul Pelosi Jr. said in the video.

Big Name Dems (and their offspring) are really piling up now with this Ukraine controversy.

Let us know what you think in the comments below! Hat Tp: AFF