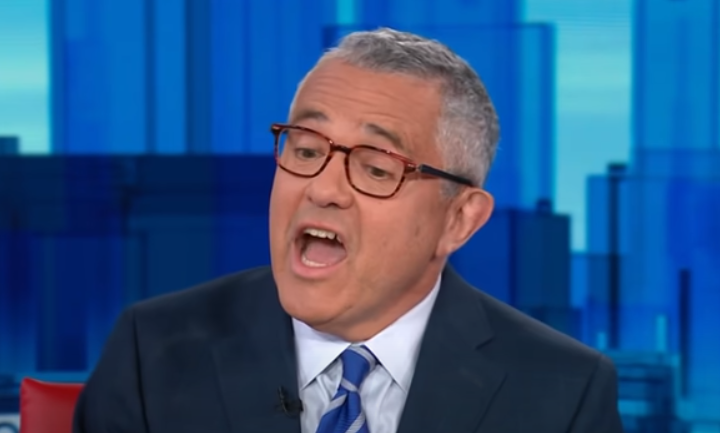 Toobin was discussing the January 6th investigation, which are a little overplayed by the liberal media. The left likes to pretend like there’s no accountability when there are currently 600 indictments, last I checked—But I digress.

During his wonky rant, Toobin barked that they “will hold people at any level, the people accountable at any level, and that means the people who organize, paid for, planned the riot that took place at the Capitol. That’s a promise, we’ll see whether they have the evidence to make it real”

What he means is that the left plans to find a way to link the riot directly to Trump and Republican members of Congress.

JEFFREY TOOBIN: I think if you missed the speech, I can sum it up in three words, please be patient. That was the argument in January, about January 6th that Garland made, and like Andy, I definitely, the phrase that jumped out at me was we will hold people at any level, the people accountable at any level, and that means the people who organize, paid for, planned the riot that took place at the Capitol. That’s a promise, we’ll see whether they have the evidence to make it real. I have to say there’s another thing that jumped out at me where he said, well, this isn’t just one political party. Really? I–I, there’s only one political party that I’m aware of, the Republican Party that’s been leading the effort to undermine the rule of law and to undermine the right to vote, and I thought, you know, in this effort to seem bipartisan he engaged in some bogus both sider-ism when it’s really only one political party in this country that’s trying to limit the right to vote and only one political party that’s been defending the people who rioted on January 6th.

VICTOR BLACKWELL: Dana, what stood out to you?

DANA BASH: Yeah, I hear what Jeffrey is saying. But in that context, when he was talking about the violence that is out there, he actually seemed to get, you know, a little emotional, and we talked about the federal judge who had somebody come to her house and kill her son, and severely injure her husband. Just about the broadly, the violence and threats of violence that are going on across the country, and I mean, if I were to put into laymen’s terms what he was trying to do, we need to take a national chill pill. People need to somehow, someway calm down. We as the law enforcement, the chief law enforcement officer effectively of this country, we’re going to do our best and we’re going to prosecute. But this is a societal issue that we need to address. And it was extraordinary to hear the Attorney General of the United States make that kind of speech as you were saying, Victor, and Alisyn, that we thought was really going to be focused on January 6th, trying to explain himself, trying to defend himself, and the Justice Department, he took it much more broad and much more pointed at society than I don’t think-I-certainly I didn’t expect.