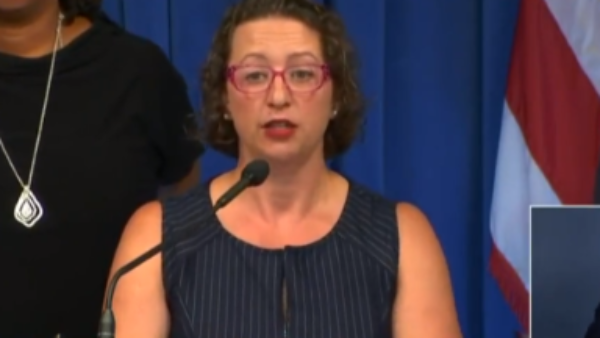 The audacity of this lawmaker is enough to make you sick. How long did Arizona and Texas ask for the Washington nuts to step up and help with the border crisis before taking matters into their own hands?

D.C. councilwoman Brianne Nadeau pointed the finger at the two border states, both run by Republican governors, claiming they turned Washington “into a border town.”

“The governors of Texas and Arizona have created this crisis, and the federal government has not stepped up to assist the District of Columbia. So we along with our regional partners will do what we’ve always done. We’ll rise to the occasion,” Nadeau said.

Governor Doug Ducey (R-AZ)  joined Governor Greg Abbott’s (R-TX) efforts in defending the southern border by bussing illegals to Washington DC. Abbott has been an especially loud advocate for government intervention at the border as it was supposed to be the responsibility of the federal government to protect homeland security—However, the Biden admin abandoned them. So the two governors have worked this out to the best of their ability.

“In many ways, the governors of Texas and Arizona have turned us into a border town. We don’t know how long this will take to resolve. We don’t know how long they will continue bussing,” Nadeau said. “And so the right thing to do here is to be prepared to ensure we can greet every bus, we can get people off on the right foot, we can get them to where they want to go, and that will ultimately help them in their immigration process.”

Texas and Arizona have sent dozens of busses containing thousands of migrants to Washington, D.C, New York City, and Chicago. Local leaders in the Democrat-run cities have complained about the strain that the migrants are placing on local social programs. The Republican governors have said that that strain is a fraction of that placed on actual border cities in their states.

The Republican governors have picked Washington, D.C., New York City, and Chicago because they are known as “sanctuary cities” that openly refuse to work with federal immigration authorities to deport many illegal migrants.

“President Biden’s inaction at our southern border continues putting the lives of Texans—and Americans—at risk and is overwhelming our communities,” Abbott said in a statement last week announcing the expansion of the bussing program to Chicago. “Mayor Lightfoot loves to tout the responsibility of her city to welcome all regardless of legal status, and I look forward to seeing this responsibility in action as these migrants receive resources from a sanctuary city with the capacity to serve them.”

DC City Council member: “The governors of Texas and Arizona have created this crisis…[They] have turned us into a border town.”pic.twitter.com/GGKSHXF25o

The true irony here is that D.C. lawmakers are too busy blaming the states that are trying to work out a solution when they need to tell their clumsy leader to get off of his rear.

The border crisis did not start with the border states, they should take their argument to the people who demolished border security—Biden and his useless VP Harris.