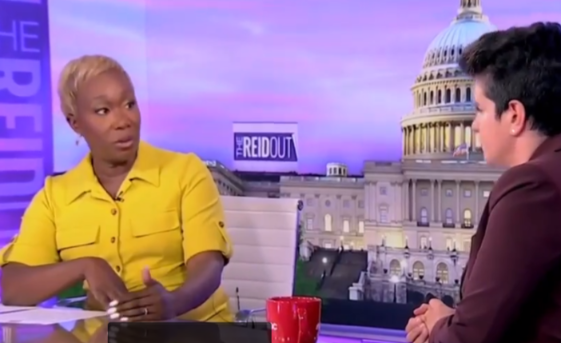 Absolutely EVERYTHING boils down to racism to MSNBC’s inciting task force. Don’t want your kids watching sexually explicit drag shows? ‘You’re a racist according to those nuts. Don’t want to raise taxes on the middle class? Racist. They haven’t actually made those two claims (yet) but in an equally absurd rant, Joy Reid and her guests compared the Supreme Court’s ruling that overturned Roe V Wade to slavery.

“The ReidOut” opened with the report on the Kansas election which voted on whether or not to allow abortion bans in its state constitution. Reid referred to the state’s vote to keep abortion rights as an “F.U.” to pro-lifers, despite Kansas being a traditionally red state.

“But on Tuesday, Kansas had its own message to send, delivering a stunning FU to the right’s shock and awe campaign against bodily autonomy. It was testament to desire for abortion rights in this country in one of America’s reddest states with even rubier red pockets, rural, conservative, MAGA, where voters resoundingly rejected a ballot measure that would have allowed lawmakers to ban abortion in the state,” Reid reported.

She added, “In much clearer terms the right to an abortion will remain in the Kansas constitution, a state constitution, by the way, that in its original form was built on opposition to slavery.”

Reid continued the connection between abortion and slavery when discussing the vote with her guests.

Alito penned the majority opinion that overturned Roe v. Wade back in June. Last month, while in Rome, the justice blasted foreign critics of the decision “who felt perfectly fine commenting on American law.”

Reid attacked his speech for including jokes and further accused Alito of pushing religious autocracy.

“The arrogance of him and the arrogance of basically thinking it’s funny and also trying to put forth this idea that this country is a land of religious persecution against Christians, that Christians are being persecuted simply because women have the right to decide what to do with our own bodies,” Reid said.

One of her guests, Catholics for Choice President Jaime Manson, agreed with Reid’s “White Christian autocracy” sentiment, claiming abortion not only supported but “it’s required” in other religions.

“They want abortion to remain legal but, you know, the struggle for a lot of religious is that abortion is not only supported, abortion access, but it’s required, especially particularly by Jews and Muslims, so it is an infringement on their religious freedom and what we see is an incredible overreach by a White Christian nationalist movement trying to take away basic rights claiming that they are the ones under siege, and that’s really where it’s painful. This is how they build power,” Manson said.