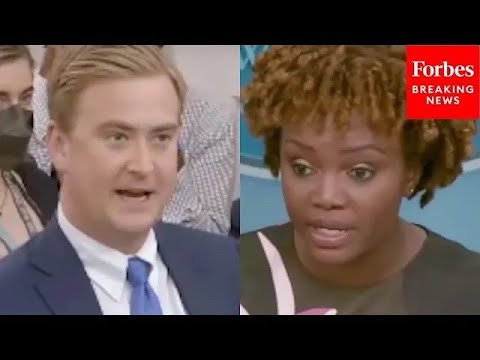 At a briefing on Monday, White House Press Secretary Karine Jean-Pierre tried to downplay the significance of the FBI’s search of President Joe Biden’s home in Wilmington, Delaware, just days after a fourth batch of documents with classified markings were found.

Fox News White House Correspondent Peter Doocy asked if there is a “precedent for people running for president after the FBI searched their sock drawer?” Jean-Pierre avoided the question and instead absolved Biden by saying that he takes classified information seriously and was focusing on delivering for the American people.

“Here’s what the president’s going to focus on. He’s going to focus on continuing to deliver for the American people. That’s his focus. That’s what he focuses on every day,” Jean-Pierre responded, adding that Biden does intend to run for president again in 2024.

However, the Justice Department has now found classified documents from Biden’s tenure as a senator and vice president in the Obama administration not just in his home but in his garage, personal library, and the Penn Biden Center think tank. This begs the question: Is Joe Biden involved in a cover-up?

At the briefing, Doocy asked Jean-Pierre this exact question. In response, she simply repeated that Biden takes classified information seriously. Unfortunately for Biden, many of his own party members are not convinced. Senate Majority Whip Dick Durbin called Biden’s situation “outrageous” while Sen. Joe Manchin said Biden should have “a lot of regrets” and admit he was “irresponsible.”

But no matter what people think of Biden’s handling of this situation, the fact remains that a special counsel has been appointed to investigate him. With Robert Hur leading the charge, the FBI’s search of Biden’s home could be the first step in uncovering what really happened with Biden and the classified documents.

At the end of the day, whether Biden is involved in a cover-up or not, the public deserves to know the truth. It is unfortunate that Biden has chosen to remain silent on the matter and rely on Jean-Pierre’s spin. If he is not guilty, then he should be willing to be transparent and open about the investigation. After all, the American people deserve to know the truth.

Google paying an amazing earnings from home $4500 to $6000 a week, that is incredible a yr in the past I become unemployed in a x21 horrible economy. Thanks Google each day for blessing those commands and now it’s miles my responsibility to pay and proportion it with everyone ..
right here i started … http://goodpayments12.blogspot.com

Scam scam every where but don’t worry , every one is not a cheater, very reliable and profitable site. Thousands peoples are making ng03 good earning from it. For further detail visit the link no instant money
.
.
required free signup and information————->>> https://net.pay1.workers.dev