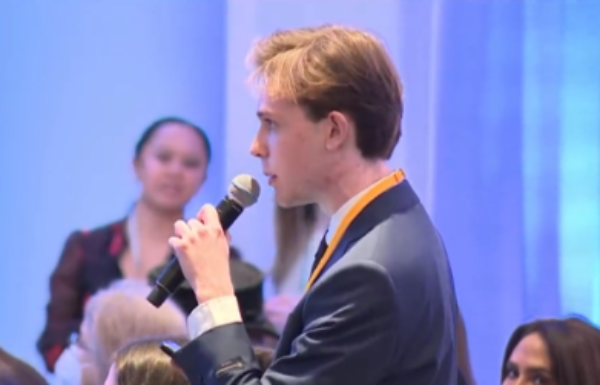 A college freshman has the opportunity to question liberal journalist Anne Applebaum about the media’s cover-up of the Hunter Biden laptop story. The student hit several points that Applebaum couldn’t be bothered to address. Instead, she offered a smug response that will certainly piss you off.

At a “Disinformation and the Erosion of Democracy” conference at the University of Chicago, college freshman Daniel Schmidt pressed Applebaum about her past writing on the president’s son’s laptop.

“Those who live outside the Fox News bubble and intend to remain there do not, of course, need to learn any of this stuff,” Applebaum wrote in October 2020, Schmidt read to her.

“A poll, later after that, found that if voters knew about the content of the laptop, 16% of Joe Biden voters would have acted differently,” the school newspaper editor continued.

“Do you think the media acted inappropriately when they instantly dismissed Hunter Biden’s laptop as ‘Russian disinformation,’ and what can we learn from that in ensuring that what we label as ‘disinformation’ is truly disinformation, and not reality?” he pressed Applebaum.

The Atlantic writer again dismissed the laptop story, this time claiming the Biden family’s business dealings are uninteresting and irrelevant to a presidential election.

“My problem with Hunter Biden’s laptop is, I think, totally irrelevant. I mean, it’s not whether it’s ‘disinformation’ … I don’t think Hunter Biden’s business relationships have anything to do with who should be President of the United States,” she said. “So, I don’t find it to be interesting. That would be my problem with it, that being a major news story.”

Applebaum’s response wasn’t just a slight to the American people, she offered a look into the media’s mentality over the subject and how they feel about having cheated voters out of their right to make an educated and informed choice. They don’t care and there isn’t any accountability, so why should it matter—Right?