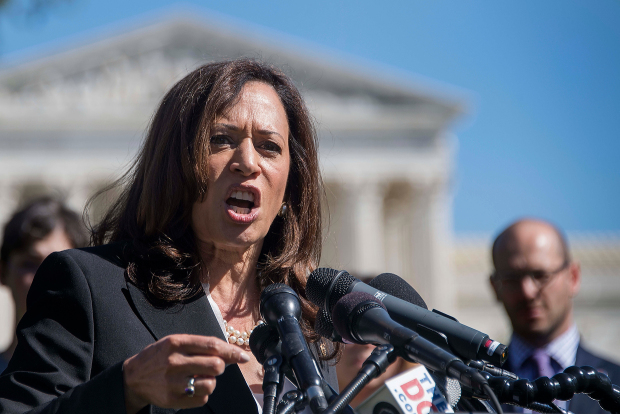 US Senator Kamala Harris, D-CA, speaks during a rally for the Dream Act (DACA) with a special focus on women, families, and the LGBTQ community at the US Capitol in Washington, DC, October 3, 2017. (JIM WATSON/AFP/Getty Images)
FacebookTwitter

Just one day after the mass shooting that resulted in seven killed and over 30 injured, Harris visited the northern suburb of Chicago to meet with local law enforcement.

Here is what she presented to the crowd:

“The whole nation should understand and have a level of empathy to understand that this could happen anywhere [to] any people in any community. And we should stand together and speak out about why it’s got to stop,” Harris added before stepping away from a confused crowd.

Harris has a lengthy history of making puzzling remarks. At a White House event alongside Jamaican Prime Minister Andrew Holness in March, Harris was panned for her “word salad” while touting U.S. relations with the nation.

“We also recognize just as it has been in the United States, for Jamaica, one of the issues that has been presented as an issue that is economic in the way of its impact has been the pandemic,” Harris said in March. “So to that end, we are announcing today also that we will assist Jamaica in COVID recovery by assisting in terms of the recovery efforts in Jamaica that have been essential to, I believe, what is necessary to strengthen not only the issue of public health but also the economy.”

Biden has always been a raving lunatic in speeches—Always. He may have gotten worse over the years but the lifelong politician has delivered more bombers than anyone in recent history. Harris, however useless she may be, could at one point talk, right? Is what Biden has contagious?