Another day, another PR disaster for United Airlines.  This time, a woman has accused them of giving her seat to a Democratic congresswoman.

Jean-Marie Simon, a 63-year-old attorney and private school teacher, is the accuser.  On December 3, she used her frequent flyer miles to buy a first-class, round-trip ticket from Washington D.C. to Guatemala.

She had a layover at George Bush Intercontinental Airport in Houston and that’s when things went awry.  When Simon went to board her flight, her ticket would not scan.  In fact, she was nowhere to be found in the system.

“It was just so completely humiliating,” she said.

The flight attendant was also confused.  She asked Simon if she had canceled her ticket.  She was told her seat, 1A, was already occupied.  United offered her a seat in economy plus and a $500 voucher.  Obviously, she took it.

Later, she learned her seat was occupied by Democratic Congresswoman Representative Sheila Jackson Lee.  Simon discussed her ordeal via Facebook.  She also disclosed that The Washington Post killed the story.

As a United customer for a decade (Gold Elite) and a reader of the Washington Post for 20 years, I never thought I’d be posting this.  The WP killed the story because they thought it was “too much ambiguity about exactly what happened,” despite the fact that I sent them copies of my boarding pass, my original receipt, my letter to United CEO Óscar Muñoz, and the photo of Rep. Sheila Jackson Lee. So they got suckered by Congresswoman Sheila Jackson Lee (D-Texas) and the absurd claim that a passenger headed for home in D.C. would cancel the second segment of her flight. Moreover, as the WP was killing the story, I received three voicemails from United customer service, with “apologies” for what happened and asking me to get in touch with them.

Here is the photo of Jackson Lee in my seat, the one I paid for, on United flight #788, sitting next to the man who apologized to me for her behavior.

Does anyone recognize the gentleman next to Jackson Lee? He may be a congressman.

Please share this story: although I want an apology from United, this is really more about how this kind of behavior by an airline continues to go unchallenged. 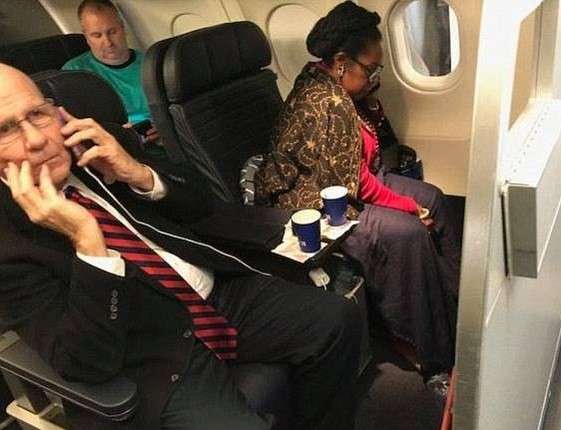 United responded to the incident.

After thoroughly examining our electronic records, we found that upon receiving a notification that Flight 788 was delayed due to weather, the customer appears to have canceled her flight from Houston to Washington D.C. within the United mobile app.

As part of the normal pre-boarding process, gate agents began clearing standby and upgrade customers, including the first customer on the waitlist for an upgrade.

Jean-Marie Simon adamantly says this is simply not true.  She flies so frequently that it seems quite unlikely.

The Congresswoman also entered the fray with her own statement.  And, of course, she rang the racism alarm.  Something straight from the Maxine Waters playbook.

Since this was not any fault of mine, the way the individual continued to act appeared to be, upon reflection, because I was an African American woman… an easy target along with the African American flight attendant who was very, very nice.

This saddens me, especially at this time of year given all of the things we have to work on to help people. But in the spirit of this season and out of the sincerity of my heart, if it is perceived that I had anything to do with this, I am kind enough to simply say sorry.

However, the wronged passenger says she saw the Congresswoman board the plane before everyone else with a flight attendant.  Simon complained long before she knew who was occupying her seat.

After she snapped a photo of the woman occupying her seat, a flight attendant approached Simon.  She asked if she was “going to be a problem.”

Another example of A-plus service from the worst airline in America.

What do you think really happened here?  Regardless, at least Simon didn’t get dragged off like one of her predecessors.