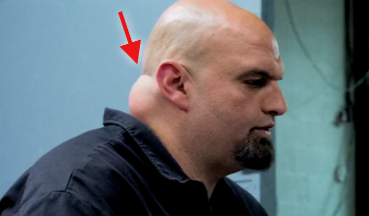 The Washington Post Editorial Board wrote in an op-ed this week that Fetterman “should release his medical records for independent review.”Fox News host Tucker Carlson followed that statement by covering the Pennsylvania Democrat John Fetterman’s weird hump on the back of his neck. ‘Keep your eyes on’ Fetterman’s lump ‘it could very well run for president with Kamala Harris in 2024’, Carlson cracked.

This has apparently rattled some in the Democrat Party, and they are furious with Carlson for even mentioning there might be a problem here.

Fetterman has suffered some major medical setbacks after his stroke earlier this year but his campaign will not release his current medical status as he runs against Republican Dr. Mehmet Oz.

“The Fetterman campaign squandered credibility by concealing from the public for two days after his stroke that he had been hospitalized,” the op-ed continued. “It waited weeks longer to reveal a more complete picture of his medical history, including that he had been diagnosed in 2017 with cardiomyopathy.”

“Last week, we told you in some great detail about a man called John Fetterman, who was running for the U.S. Senate from Pennsylvania,” Carlson began. “What we didn’t mention at the time was Fetterman’s running mate because honestly, we didn’t know he had a running mate.”

“But we learned the identity of this running mate yesterday when Fetterman for the first time in memory removed the filthy, DNA-covered hoodie that, as it turns out, conceals quite a bit underneath,” he continued. “So beneath the foul-smelling hoodie was this protrusion. As you can see, it’s not quite a goiter, but it’s definitely bigger than a pimple. It’s a lump.”

“But what sort of lump?” Carlson continued. “That’s really the question. Does this lump have its own Instagram? Does it plan to run for statewide office in Pennsylvania? Don’t laugh. A party that put Joe Biden in the White House is perfectly capable of building a whole campaign around any insentient lump of flesh.”

“In fact, they’re running John Fetterman, who can’t even talk,” Carlson concluded. “So keep your eyes on this lump. It could very well run with Kamala Harris in 2024.”

Tucker Carlson highlights the large bump on U.S. Senate candidate John Fetterman's (D) neck that has not received very much media attention which comes as questions swirl about his fitness for office following the stroke he suffered. pic.twitter.com/3kPFDzKpEu

Fetterman has moved his entire campaign virtual and it seems like his failing health might be the cause of the sudden shift. His opponent, Dr. Oz, has challenged him several times to an in-person debate but the Democrat has finally taken Oz up on his offer.