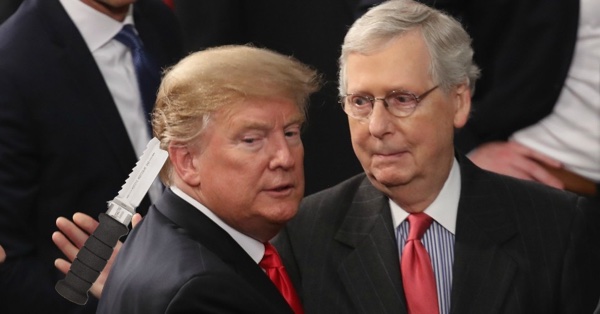 You really have to wonder how Senate Minority Leader Mitch McConnell, R-Ky continues to get reelected. He’s a miserable relic from a failed system and continues to vote against his constituents and yet—There he is. He’s sort of the republican version of Nancy Pelosi. We’re just stuck with him until he expires.

Maybe it’s his political ties to the Clintons and Democrats that keep him around. It’s just speculation but I can’t think of any other reason Republicans keep him around. Trump just shredded McConnell for being a ‘lapdog’ for Dems and “ramming through a disastrous continuing resolution.”

“Finally, some Republicans with great courage!” Trump wrote in a Save America PAC statement posted to Truth Social on Thursday night. “Rick Scott, Ted Cruz and Mike Lee are working hard to stop Chuck Schumer and his favorite, Sen. Mitch McConnell, from ramming through a disastrous continuing resolution that would do nothing to stop inflation, grow our economy or restore the American dream — it would only put big government first and give [Sen. Joe] Manchin his terrible deal.”

Manchin, D-W.Va., helped rework the Inflation Reduction Act to his liking to allow him to get on board as a 50th vote to pass the law on the tiebreaking vote of Vice President Kamala Harris.

“Instead, we need a long-term continuing resolution so we can deal with the real emergency at hand, the radical left’s destruction of America, and once again, put America first. McConnell is so bad!” Trump’s statement concluded.

Earlier Thursday, Trump issued a statement blasting McConnell for bending to Democrats on the continuing resolution as he did a year ago. The resolution would permit the government to remain open and funded under past budget terms.

During Trump’s second year in the White House, Senate Democrats forced a government shutdown by refusing a continuing resolution and not passing a new budget.

“Mitch McConnell is giving the Democrats everything they want,” Trump’s first Save America PAC statement, posted to Truth Social, read. “He is their lapdog! He didn’t stop trillions of dollars in spending by refusing to use the debt ceiling as a negotiating tool.

My last month paycheck was 11000 dollars… All I did was simple 0nline work from comfort at home for 5-7 hours per day that I got from this agency I discovered over the internet and they paid me 92 dollars every hour.
﻿for more detail… https://cashliberty7.blogspot.com/