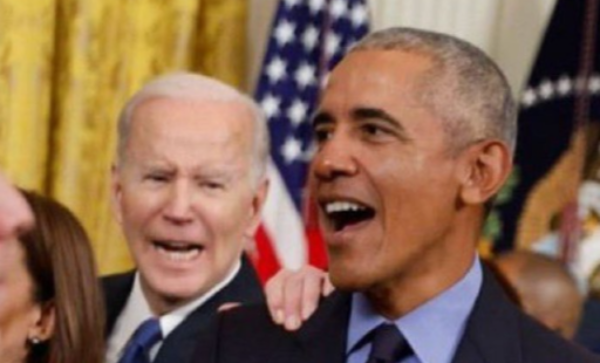 Joe Biden was dumbfounded during the event marking the 12th anniversary of Obamacare. His old boss stole the show. Absolutely no one acknowledged him. Hell, even Kamala saw more action that night.

To add some much needed insult, Obama opened his remarks by calling Biden ‘Vice President’ LOL

“It’s wonderful to be back to say thank you to all of you. But most of all, coming back here gives me a chance to say thank you and spend some time with an extraordinary friend and partner who was by my side for eight years. Joe Biden and I did a lot together,” Obama said. “So when President Biden said he was not going to just celebrate the ACA, but also announce actions that would make it even better, I had to show up.”

Obama: Thank you Vice President Biden… That was a joke pic.twitter.com/8PqMwws28M

“Mr. President, welcome back to the White House, man. It feels like the good old days,” Biden said following Obama’s remarks at the lectern before signing an executive order. “I have to admit one thing I haven’t gotten down. Barack Obama could sign his name using nine different pens. But I’m going to use one.”

After dropping that slobbery mess, Biden is left out in the wind. Lost. Confused.

Biden pawed and yelled for Obama to notice to no avail:

Political commentator Ben Shapiro mocked Joe on Twitter, “Obama returning to the White House while Biden goes back to being the irrelevant dullard he always was must be quite difficult for Democrats. After all, Biden is the anchor to which they are tied.”

Several angry Twitter users claimed that Biden was not being ignored and argued that the angles give the wrong ‘impression’. So, let’s look again from a different angle: Here is Obama pushing Kamala Harris forward in an introduction while Biden desperately tries to get his attention, even grabbing his shoulder at one point:

It's pretty painful to watch pic.twitter.com/gU7Prk30U9

That’s embarrassing, even for the king of gaffes. It just goes to show where Joe ranks among other Democrats.