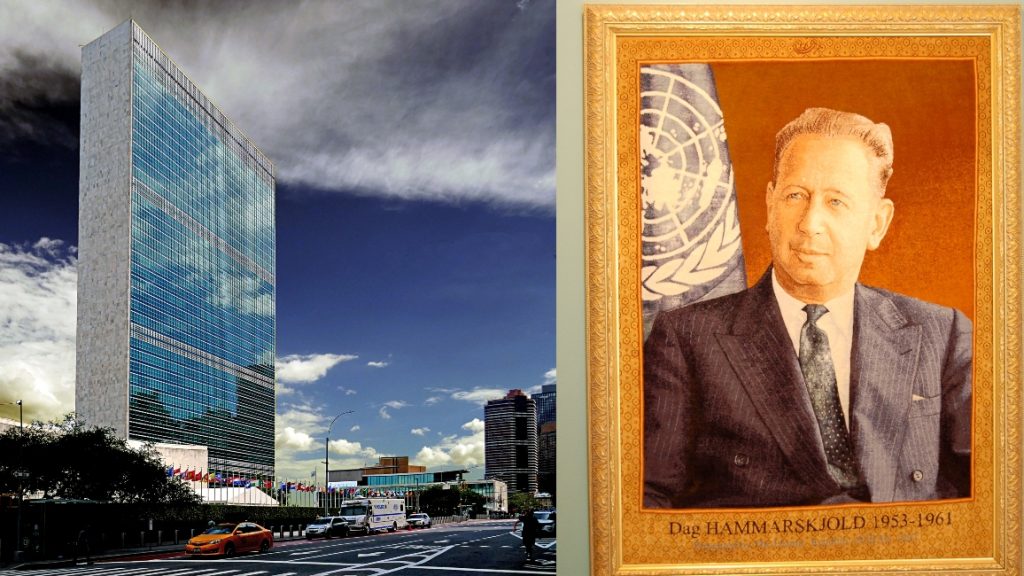 This analysis and commentary article by Andrew White originally appeared on the “Tales from Occupied America” newsletter at Substack.com.

There’s no easy way to put this, so I will just state it plainly:

There is a luciferian “meditation room” located within the headquarters of the United Nations in New York City.

The room, designed by artist Bo Beskow at the direction of the second Secretary General of the UN Dag Hammarskjold, both men of Nordic descent, was officially unveiled in 1952 initially for the purpose of serving as a location “dedicated to silence, where people could withdraw into themselves, regardless of their faith, creed or religion.”

However, the original plan for the room was ultimately tossed by the Secretary General, who “wanted something more dignified” instead.

Upon its redesignation, the room reopened 5 years later in 1957 — this time containing “an abstract mural, a composition of interlocking geometric patterns” that overlooks a 6.5 ton iron ore altar lying in the center of the room.

According to the UN, the bizarre mural is “supposed to evoke a feeling of the essential oneness of God.”

“We have within us a centre of stillness surrounded by silence. This house, dedicated to work and debate in the service of peace should have one room dedicated to silence in the outward sense and stillness in the inner sense… People of many faiths will meet here and, for that reason none of the symbols to which we are accustomed in our meditation could be used,” Secretary General Hammarskjold stated during the exhibit’s opening ceremony.

He would further add that the altar represents “a meeting of the light, of the sky, and the earth… it is the altar to the God of all.”

The bizarre exhibit was claimed by the UN to be dedicated to “the God whom man worships under many names and in many forms.”

In order to truly understand the bizarre nature and meaning behind the UN Meditation Room, one must look down the rabbit hole that is:

The Lucis Trust, Alice and Foster Bailey, and the “New Age”

In the early 1920’s, an organization known as The Lucis Trust was established by “luciferian” occultist scholars Alice and Foster Bailey (who was also a 32nd degree Freemason) as a “vehicle to foster recognition of the universal spiritual principles at the heart of all work to build right relations.”

The Lucis Trust logo appears to be some sort of Nordic pagan rune.

In 1922, the Lucis Trust launched a publishing company named the Lucifer Publishing Company, purportedly to publish Alice Bailey’s “New Age” book titled Initiation Human and Solar, which “covers the order of the planetary hierarchy of spiritual entities, and its stages of mastery through initiation, by which it delineates the fourteen rules through which the neophyte initiate might become an applicant at the Portal of Initiation.”

On the organization’s website today, the Lucis Trust summarizes that the Bailey’s conveniently named their publishing company after the Prince of Darkness because they “sought to elicit a deeper understanding of the sacrifice made by Lucifer,” who they claim was “the angel who brought light to the world.”

“Alice and Foster Bailey were serious students and teachers of Theosophy, a spiritual tradition which views Lucifer as one of the solar Angels, those advanced Beings Who Theosophy says descended (thus “the fall”) from Venus to our planet eons ago to bring the principle of mind to what was then animal-man. In the theosophical perspective, the descent of these solar Angels was not a fall into sin or disgrace but rather an act of great sacrifice, as is suggested in the name “Lucifer” which means light-bearer,” claims the Lucis Trust.

The Lucifer Publishing Company would eventually change its name in 1924 to the Lucis Publishing Company due to backlash from Christians who expressed concern over the organization’s aparant and rather obvious boasting of the Devil’s alias.

The Lucis Publishing Company would go on to publish loads of “New Age” occult literature.

In 1932, the Lucis Trust established World Goodwill, which has been historically recognized by the UN, boasts “defining new Sustainable Development Goals for humanity,” and encourages people to pay homage to the Meditation Room.

“The creation of an enlightened public opinion begins with the individual. Educate yourself about the United Nations and its activities, as well as the requirements for a harmonious world order,” writes the Lucis Trust on a web page titled Supporting the Work of the United Nations.

“Groups and individuals that value the power of thought are encouraged to support the United Nations through meditation, invocation and prayer. Learn about the Meditation Room at the United Nations which is open to the public when the UN Headquarters building in new York is open. From time to time World Goodwill’s Cycle of Conferences Initiative focuses on important meetings and summits at the United Nations. See also the Group for Creative Meditation’s, ‘Become a UN Delegate Through Thought’ ; the Spiritual Caucus at the UN in New York; the NGO-Alliance at the UN in Geneva; and the Aquarian Age Community web materials on the UN,” states Lucis Trust.

As noted by author Isobel Blackthorn, who holds a PhD in Western Esotericism for her in-depth study on the Lucis Trust co-founder Alice Bailey, “Conspiracists are not wrong when they point to the infiltration of the UN by Alice Bailey’s co-workers. Membership of the UN’s Spiritual Caucus is filled with her people. Her organisation, World Goodwill, is a UN NGO. In 1952, Eleanor Roosevelt read Alice Bailey’s prayer, The Great Invocation, on a radio broadcast from the UN building in New York.”

This would be the same year that the Meditation Room was first unveiled.

“Evidence of the growth of the human intellect along the needed receptive lines [for the preparation of the New Age] can be seen in the “planning” of various nations and in the efforts of the United Nations to formulate a world plan… From the very start of this unfoldment, three occult factors have governed the development of all these plans…”

-Alice Bailey in Discipleship in the New Age (1995)

“One key UN figure closely associated with Alice Bailey is Robert Muller, who served in the UN for forty years and was assistant to three Secretary Generals. Muller devised the World Core Curriculum for which he was awarded the UNESCO Peace Education Prize in 1989, a curriculum loosely based on Alice Bailey’s Education in the New Age. He contributed to Alice Bailey’s magazine, The Beacon, and addressed Arcane School conferences,” Blackthorn wrote in Alice A. Bailey: Mother of the New Age or the New World Order? (2019).

“Dag Hammarskjöld, the rational Nordic economist, had ended up as a mystic,” Muller once wrote of the former UN Secretary General and Meditation Room pioneer in The Desire to be Human: A Global Reconnaissance of Human Perspectives in an Age of Transformation (1983). “He too held at the end of his life that spirituality was the ultimate key to our earthly fate in time and space…”

What does this all mean?

I would be lying to you if I claimed to have all the answers, but I’m certain that this unsettling mystery gets even more complex, confusing, and concerning.

It is evident, however, that there exists a strange religion deeply rooted within the UN, which has historically served as its spiritual foundation. Something about all of the world’s religions uniting together upon the coming of a cosmic “Christ” — a one world religion biding its time in the shadows (or out in the open, hiding in plain sight).

“Crises, as we know from our own direct experience, serve as great spiritual opportunities, challenging us to move ever closer to our own inner divinity. Thus, the pending intensification of planetary crises will serve to test and prepare humanity for the unprecedented and imminent opportunity in which millions may tread the path of initiation.

We are told in fact, that this is one of the reasons why the Christ must reappear at this time. For it is He who officiates at the first two initiations, which once again-as in Old Atlantis-will be openly commemorated on the physical plane.”