The Biden administration may very well be the least transparent presidency in the history of the US. At least once a month a report will surface explaining how the administration has fought to suppress information that would make Biden seem more incompetent—If that’s even possible. This month, it’s all about the yearly immigration report released by Ice.

The report typically details on deportations but apparently the administration has blocked that report from public view:

“The Biden administration has yet to release a report that details the number of illegal immigrants removed from the United States in 2021, keeping the public in the dark about its handling of the immigration crisis.

Immigration and Customs Enforcement did not release its annual report in 2021, a departure from standard agency practice since at least 2011. In each of the last nine years, ICE released the report in the final weeks of the calendar year, most recently on Dec. 23, 2020 during the Trump administration.

It is unclear whether ICE has completed the report, which provides a lengthy summary of the agency’s enforcement and removal operations, as well as immigration-related security threats. A spokeswoman for the immigration agency told the Washington Free Beacon a release date for the report has not been determined.

The absence of the 2021 annual report has prompted outrage on Capitol Hill. Sen. Josh Hawley (R., Mo.) questioned the motives behind the White House’s secrecy on the topic of immigration.

“During record-breaking levels of illegal immigration, DHS and ICE have taken steps to dismantle interior enforcement operations that keep our communities safe from criminal aliens,” Hawley told the Free Beacon. “I’ve been calling for transparency into these radical policy changes for months. If ICE is intentionally hiding their annual report from the public, then it’s safe to assume it doesn’t show any improvement; it shows failure.”

The administration’s decision not to release the ICE report marks the latest example of Biden’s failure to live up to transparency standards set by both its Democratic and Republican predecessors.”

“Rep. Troy Nehls (R., Texas), who spent decades in the military and law enforcement, told the Free Beacon that there is a direct tie between Biden’s rhetoric as a presidential candidate and the immigration crisis he is presiding over as president.

“Before President Biden was even inaugurated, he was inviting people to swarm the southern border,” Nehls said. “On day one of his presidency he dismantled President Trump’s highly successful policies and look at the results: nearly two million illegal crossings from over 100 different countries, more fentanyl deaths than car crashes, and rampant crime across the country.”

Nehls believes that Biden’s failures on the border will doom the Democratic Party in November. “The Biden administration is trying to hide their failure, but the American people are waking up,” Nehls said. “They know we have a crisis at the southern border, they know this crisis is a direct result of President Biden’s policies, and they will voice their concern at the polls in 2022.”

[ JOIN US ] I get paid more than $130 to $387 per hour for working online. I heard about this job 3 months ago and after joining this I have earned easily $26921k from this without having online working skills . Simply give it a shot on the accompanying site…
Here is I started.…………>>  http://Www.NETCASH1.Com

Hi guys, I am now making extra $19k or more every month from home by doing very simple and easy job online from home. I have received exactly $20845 last month from this home job. Join now this job and start making extra cash online by follow instruction on the given website…..

Last edited 4 months ago by DanaRoyster
-3

Make everyone ( $26,000 __ $38,000 ) A Month Online Making money online more than $15k just by doing simple work With No Prior Experience Or Skills Required. Be Your Own Boss And for more info visit any tab this site Thanks a lot just

Last edited 4 months ago by MorganDawson
-3

Most easiest and the most secret way of making money online. Start receving paychecks every week by just working online from home. i recently received $16493 in my bank of my last month’s working. i just gave this job 2 hours maximum from my day. simple and easy home based job. go here for info.

Last edited 4 months ago by Hazel
-3

I’m making more than $75k by just doing very easy and simple online job from home.Last month my friend sister received $94280 from this work by just giving only 2 to 3 hrs a day.Everybody start earning money online. visit for more details…

Last edited 4 months ago by JaneLangston
-3

I started making $ 155 / hour in my spare time doing tasks with my laptop that I got from this company I stumbled upon online… Check it out and start earning yourself. I can say that my life has completely improved! Take a look at what I’m doing… ..

Last edited 4 months ago by PatriceSerna
-2

Making extra salary every month from home more than $15k just by doing simple copy and paste like online job. I have received $18635 from this easy home job and now I am a good online earner like others. This job is super easy and its earnings are great. Everybody can now makes extra cash online easily by just follow
The given website……… http://www.livejob247.com

I get paid over $87 per hour working from home with 2 kids at home. I never thought I’d be able to do it but my best friend earns over 10k a month doing this and she convinced me to try. The potential with this is endless. Here’s what I’ve been doing… http://www.Buzzjoin.com

Last edited 4 months ago by juliya
0

Last edited 4 months ago by difija
-2

It’s not just one crisis at our southern border (and beyond); there are at least FIVE! Starting with the obvious about which everyone speaks, there’s the humanitarian crisis. But there’s also a public health crisis associated with individuals illegally entering the U.S. from about 160 different countries where some very dangerous diseases are prevalent, diseases that were eliminated in the U.S. before the Biden-encouraged invasion of foreign nationals began. (Hey, it’s NOT just about those who have not been given the vaccine against the Chinese coronavirus.) Then there are the trafficking crises…human and drugs that are being smuggled in by the Mexican cartels daily…women forced into the sex trade or slavery disguised as “indentured servitude” to pay for being transported into the country; and the massive quantities of drugs like fentanyl that are killing so many addicts and young “experimenters.” And finally, there’s the national security crisis that is being exacerbated by the numbers of “get-aways” who had no contact with our border patrol when they illegally entered and then disappeared into the interior. We have no idea who these people are…or what their intentions might be towards us as individuals or as a nation. This situation is “fubarb!” 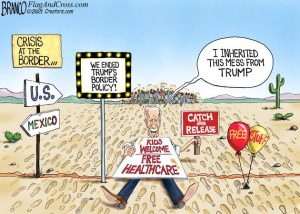 I am making over $9k a month working part time. I kept hearing other people say to me how much money they can make connected so I decided to look into it. Well, it was all true and has totally changed my existence. This is what I do…..
Go Here﻿…………. http://www.livejob247.com

Moderator: Why do you permit all of these “get-rich-on-the-internet” spam/scam messages to be posted as “comments” on your site? Do they pay to post them? Please respond.

When obidens tyranny became law, rebellion became America’s duty. I can’t wait to see the DemonRAT Socialist Regime buried in the earth for 10,000 years, with not word of the Luciferians mentioned in the history books. The DemonRATS are the enemy of America and the absolute worst threat to our republic. To qualify to become a DemonRAT you simply need to be a thief, a liar, a murderer, an extortionist, a child molester, a pedophile an obiden or piglosi. You get the point. They are all spawns of Satan. It’s gonna be hot 🔥 🥵 😩 😫 DemonRATS and it’s for an eternity.

Last edited 4 months ago by xakef
0