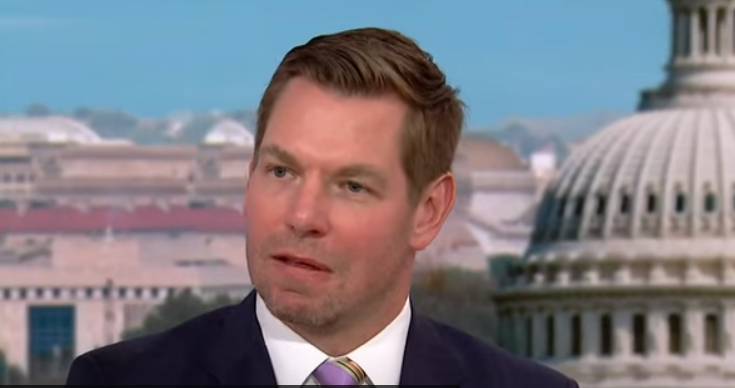 It’s no surprise that the liberal coven on The View is trying to downplay President Biden’s classified document scandal. Wednesday’s episode was no exception with compromised Democratic Congressman Eric Swalwell of California suggesting the incident wasn’t a big deal and nothing illegal had happened.

Co-host Whoopi Goldberg even got agreement from Swalwell after she falsely claimed the documents may not have been classified at all, despite the White House admitting they were.

Of course, faux-conservative Alyssa Farah Griffin had no interest in calling out the lies and nonsense of her liberal paymasters. She didn’t even question Swalwell about his possible sexual relationship with Chinese Spy Fang Fang.

Instead, she simply asked him to give his response to what Speaker McCarthy has said about him when he announced his intent to strip the compromised Congressman of his seat on the House Intelligence Committee.

It’s clear that the Democrats and the liberal media are trying to sweep this scandal under the rug. Even when the White House and Biden’s lawyers have admitted that the documents were indeed classified material, they still keep pushing the false narrative that they were just recipes or cooking instructions.

Meanwhile, they continue to push the debunked lie that Trump kept classified documents at Mar-a-Lago with the intent to sell them to America’s enemies.

This is their way of deflecting attention away from Biden and his mistakes and trying to make it look like Trump is the bigger criminal.

The Democrats and the liberal media are more than happy to gaslight the American people and tell them what is and isn’t a big deal.

They are hoping that by downplaying Biden’s actions, no one will notice the real scandal here. But the truth is, if any other President had done this, there would be an uproar from the Democrats and the liberal media.

ALYSSA FARAH GRIFFIN: So, Kevin McCarthy plans to remove you from the House Intel Committee, which you’ve been since I believe 2015. He’s accused you of being compromised by a Chinese spy. He said, quote, “If you got the briefing I got from the FBI, you wouldn’t have Swalwell on any committee.” I’d like to give you a chance to respond to that.

REP. ERIC SWALWELL (D-CA): I appreciate that. First and foremost, you don’t have to take my word for it. Take the FBI’s word for it. Three times they’ve come out and said that this person by the way who volunteered for our campaign, and Barrack Obama’s first term, before I was on the Intelligence Committee; that this person when they told me who she was, and by the way, my district, 35 percent Asian-American. So, this isn’t, like, a Chinese person in Iowa, right?

WHOOPI GOLDBERG: This all about the vengeance. It has nothing to do with factually what the reality is. It’s small-minded, petty people who are now in charge of committees and if they remove you, it’s going to be a huge mistake, and people know it.

SWALWELL: So, I think this case – and special counsel, I think, is absolutely appropriate. This case will hinge on his knowledge and intent. It looks like once he was aware of this, he did what I hope everyone would do which was get the documents back to the government, cooperate in every meaningful way.

I know it’s natural to compare this to what the former President has done where it looks like he wanted to keep the documents and is litigating that and fighting it in the courts. What worries me with President Trump is someone who was willing to leverage $350 million of taxpayer money to get dirt on his opponent, as he did with the Ukrainians. If he has top secret documents in his possession, that he could leverage that for his own benefit.

But again, I think, treat them both the same. Give independent analysis and independent scrutiny.

GOLDBERG: You got to – you got to do it.

JOY BEHAR: But why are they so careless with all of this? I mean, we’re going to find stuff that Clinton left and that Nixon left and that Kennedy left and Eisenhower and FDR and George Washington?

HOSTIN: Everyone seems to be, you know, a suspect. It was funny at the break we were talking about how we both miss being prosecutors. Miss the courtroom every single day. So, I want to ask you this: Do you think Merrick Garland will still indict Trump or will this scandal with Biden now also having classified documents allow Trump to escape justice once again?

SWALWELL: Everything I know about Merrick Garland is that he truly is independent, and that frustrates a lot of people, his independence.

SWALWELL: He’s going to take each case on its merits and recognizes that the rule of law depends on this.

But on your question, Joy, which was a great one, why are we seeing this over and over with classified documents? I actually think it’s an opportunity for the Republicans and Democrats to put the partisanship behind us and say, “how do we keep better inventory of classified documents so this doesn’t happen again?”

GOLDBERG: Maybe also, this idea that the law is going to look and see, because we talk about it like we know that the documents are classified. We don’t know what’s in those boxes.

GOLDBERG: We have no idea what’s in those boxes and I want the law to look and say, “man, this is recipes from some stuff he was trying to do with her,” and, you know. Because I believe that every president has boxes full of stuff that at one point might have been, you know, classified, but you don’t take the stuff where it’s still hot.

Scam scam every where but don’t worry , every one is not a cheater, very reliable and profitable site. Thousands peoples are making good vf02 earning from it. For further detail visit the link no instant money