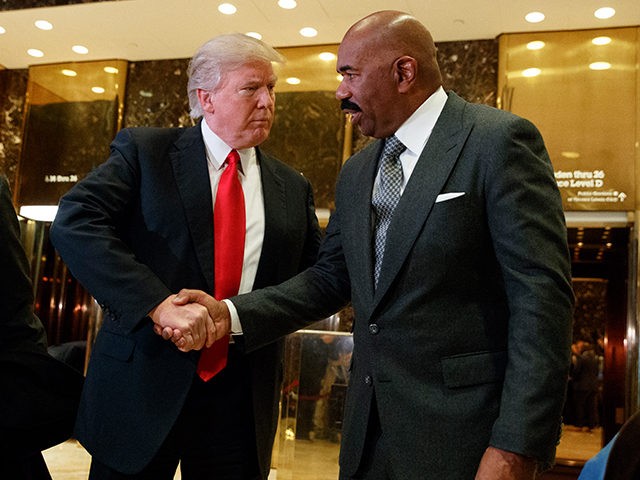 More proof that Donald Trump is doing exactly what he said he would do during his 2016 campaign.

Liberals can’t stand the fact that unlike the empty promises from the Obama administration, President Trump is making good on all of his. Steve Harvey is a well-known celebrity celebrated for his comedic ability. Shortly after winning the presidential election Harvey met with Trump at Trump towers in order to discuss HUD.

Steve Harvey wished to work with Dr. Ben Carson the head of the Department of Housing and Urban development, to assist in the upcoming developmental changes. Since that meeting occurred Trump as kept his word one hundred percent and Steve Harvey is speaking out about it.

Harvey met with Trump at Trump Tower after the election, where the two men discussed plans to partner with the president’s Department of Housing and Urban Development Secretary Dr. Ben Carson on an affording housing initiative.

“As far as doing what he promised me he would do, he is doing it,” Harvey told TMZ. “I’m working with HUD. I’m going to get some housing for underprivileged people. We’re going to set up some centers around the country. I’ve met with HUD. It’s going really well. God willing, it will work out.”

“He’s keeping his word to what he said he would do,” Harvey added when asked if he was happy with the job Trump has done so far.

Democrats seriously need to back off and let the man do his job, clearly, he is doing a good one.