Former Democratic Rep Cynthia McKinney is at it again. She is known for her wild conspiracy theories. SheMcKinney is an anti-Semite from birth I think.  now blames 9/11 on Zionists. That is ridiculous since all of the hijackers were Muslims.

The people in her district elected her six times, so they must not be too bright. When she did lose, she was beaten by Hank Johnson. Johnson is the one who was afraid that Guam would capsize.

McKinney lost in 2002. That was the year she punched a Capitol policeman for asking to see her ID pin. Like every Capitol police officers are supposed to recognize all 435 representatives.

That incident was the beginning of the end of her political career and she has spent most of her time since then on anti-Israeli propaganda.

McKinney posted a picture of a puzzle that showed the World Trade Centers on fire. The puzzle said, “Zionists did it.” 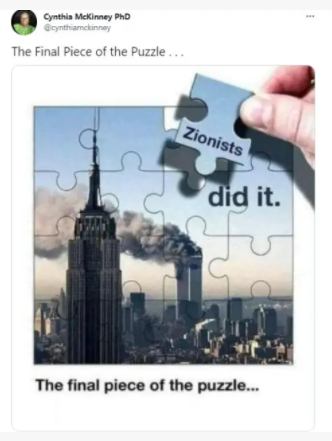 thinking at least thousands have been elected to public office due to having a negro vagina instead of an intellect .. for sure in the DC cesspool run by that senior drunken vagina, nance peslutsi

Tell the fat ugly black dog to stop barking. She ca also shove her racism up her big black ass

Yup, Hank Johnson (D) is first cousin close to an idiot, but Cynthia McKinney (D) is both stupid and evil. Her only positive is that she is an EX (D) Representative.

Send her back to the jungle, the f……g bitch.

Not just no, but HELL, NO! Rewarding bad behavior begets MORE bad behavior; look in a mirror, if you doubt me! Come the RIGHT way (legally) or not at all!

Stupid is as stupid does. You want to dumbfound an idiot like her, then tell her to prove it. Where I come from you have to have facts and something tangible to support your claims. But, in today’s warped society, some people will believe anything and everything. I am a realist. So, your bullshit conspiracies should be directed to the ignorant and misinformed who will believe anything you say. Not in my world skank.