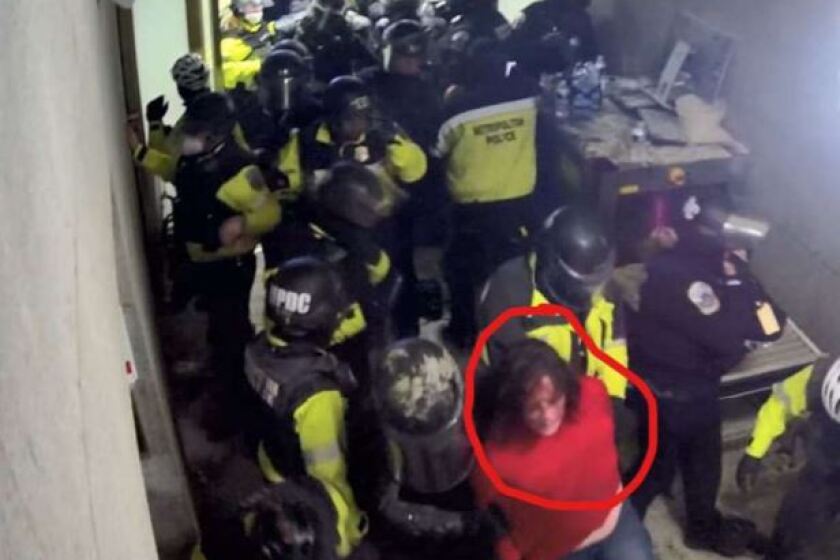 You already know about the Capitol Police who murdered Ashli Babbit and Roseanne Boyland, but what you have probably never heard of is the attempted murder of Victoria White at the hands of Metropolitan Police Department (MPD) commander Jason Bagshaw and some of his friends.

White was hit on the head about 30 to 35 times, even as she was begging for mercy. She fell once and was then hit with pepper spray and then hit some more.

Is it a coincidence that the three victims were all women? Or is it because the police in DC are misogynists who hate women? Personally, I tend to go with the idea that the DC police are too cowardly to try this behavior against a man.

Hopefully, when the Republicans retake the House, the officers involved will have to answer for their crimes. The FBI and the DOJ both absolved Ashli Babbitt’s murderer without so much as interviewing him about the shooting.

Victoria White was brutally beaten near death by the US Capitol Police. According to attorney Joseph McBride:

She is hit approximately thirty- five times over the course of 4 minutes and 30 seconds, while appearing to be begging for mercy the entire time. She is hit with the baton while facing away. She is hit with the baton while facing forward. She is speared and poked with the baton about the face so as to inflict maximum pain. She collapses more than once and is stood up by the officers only to be maced and beaten again. At some point, White-shirt puts away his baton, not because he is showing mercy because he has a clear avenue to her face. As such, he unloads on the defenseless woman punching her five times in five seconds, directly in the face, with all of his might.

Victoria White was pushed into the Tunnel. She was then BRUTALLY BEATEN by OFFICER WHITE SHIRT. Dozens of baton blows. Punched in the face 5x. A defenseless woman, she is PULVERIZED for wearing a TRUMP Hat. Thank you @julie_kelly2 for speaking truth to power. @DarrenJBeattie pic.twitter.com/6hMCWa7n3V

Victoria White was pushed into the tunnel and desperately tried to escape. She never raises a finger to the police and never commits an offensive act. She is simply stuck, and they know it. What do they do? They attack her mercilessly. And there is nothing she can do about it…

She is hit with the baton while facing forward. She is speared and poked with the baton about the face so as to inflict maximum pain. She collapses more than once and is stood up by the officers only to be maced and beaten again…

The Washington D.C. police officer who beat a Minnesota woman with a metal baton at the U.S. Capitol on Jan. 6, 2021, is a 19-year veteran with a history of use-of-force complaints.

The officer who delivered most of the blows was identified in new court filings as Metropolitan Police Department (MPD) commander Jason Bagshaw, 45.

“The tunnel CCTV footage shows that over an almost two-minute span running from approximately 4:07:00 to 4:08:54 p.m., Lieutenant Bagshaw repeatedly struck, or tried to strike, the woman in red with his baton,” U.S. prosecutors said in one of the briefs (pdf).

Bagshaw has since been promoted to commander.