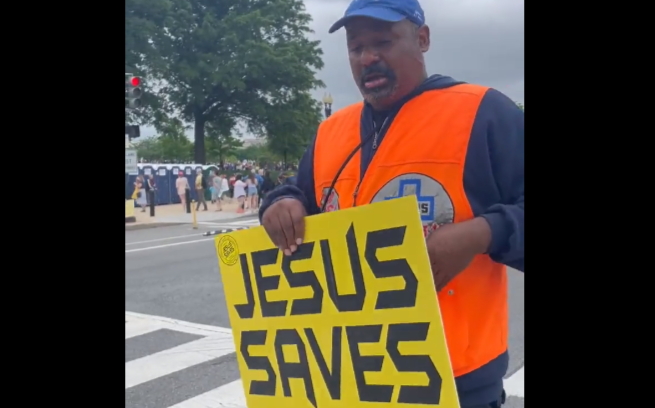 Pro-Roe protesters gathered outside of the Washington Monument shouting obscenities with children around while one man set them all on fire using kindness. “I’m so glad your mother didn’t abort you!” and “I love you!” the man shouted to the unhinged crowd. That was all it took to make the angry mov lose their minds.

The Daily Wire observed a man on a scooter yell an obscenity at the pro-life man from across the street, to which the pro-life protestor responded, “I am SO glad she did. I get to see you, my friend!”

“I know your name. Moron,” said a man who was leaving the protest and appeared to be blind.

“Hey, I’m glad your mother didn’t abort you,” the pro-life protestor said cheerfully. The man responded, “That was her choice, you dumb f*ck.”

“You’re right, you’re alive, and we get to talk today, and I get to see you!” he responded. “I am so glad y’all’s moms didn’t abort you. I love you sir, and you can’t do nothing about it.”

This man cheerfully spent his day yesterday telling pro-abortion protesters, “I’m so glad your mother didn’t abort you” and reminding them that Jesus loves them. He received a whole lot of vitriol and vulgarity with unmatched cheerfulness. pic.twitter.com/5CuZNmFzFC

“Jesus,” he said, asked by The Daily Wire what was going on. “Every day.” The man said he will continue spreading his message “as the Holy Spirit leads” him.

“My message is Jesus Saves,” he said, holding up his sign, before pointing to the crowd. “They’re out here for an abortion rally.”

“So the Holy Spirit told me to tell them, I’m glad your mom didn’t abort you,” he said with a big smile.

Later on in the afternoon the pro-life man made his way up to the Supreme Court where he continued to tell pro-abortion protestors that he was glad that their mothers didn’t abort them and that Jesus would save them, prompting the crowd to become angry and shout at him.

“Take your faith and shove it,” the crowd angrily responded.

“Take your faith and share it,” he shouted back at them.

He started jumping along to their chants. pic.twitter.com/zZndj6mN9Y

It’s nuts how crazed the left becomes when someone shows them a little love. At this point, I’m starting to think they were not hugged enough as children and need therapy. What do you think? Let me know in the comments.