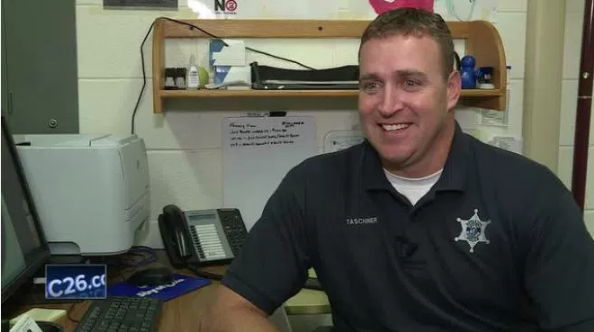 Last month,Officer Jack Taschner pulled off a pretty epic prank with some high school students.  A student caught the moment camera, and it’s been going viral ever since.

Officer Jack Taschner is a police officer in Appleton, Wisconsin.  A month ago, he approached the student section of a football game.  At first, it seemed like the students were upset at his presence.  He had singled out a student, and it looked like the student was in some serious trouble.  They both were in front of the crowd speaking in hushed tones.

The students behind them began to grumble, boo, and make siren noises at the officer.  The animosity was palpable.  Then, they threw a curve ball for all the spectators.

Taschner dropped down into a squatting position with his arms in front of him.  He began mock driving in a police vehicle by stamping his feet.  Meanwhile, the students behind him joined in on the fun.  They followed the officer’s movements and formed a pretty impressive flash mob.

The Appleton Police Department added the video to their station’s Facebook page.  Here is their status update:

NO FUN ZONE? Just when it looked like SRO Taschner was breaking up the fun during the Appleton East Football game, expectations changed.

The update has been shared almost 32,000 times and gained more likes and comments.

Taschner loved every minute of it.  From an interview with the officer:

I got into it as much as they did.  When I realized they were all doing it with me, I wanted to let it go on forever. I knew my legs weren’t going to let me.

With movements like AntiFa and Black Lives Matter often strong-arming their agenda, it’s hard to remember that policemen are people, too.  Just look at how much Mike Isaacson has dehumanized them.  Moreover, they are usually well-known members within their communities.