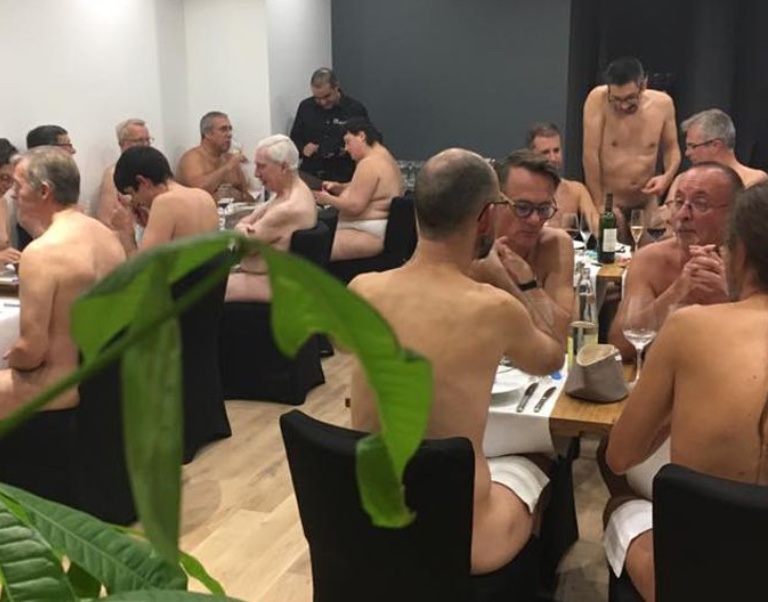 Last Friday, a restaurant named O’Naturel opened in Paris.  Pretty typical stuff, but this isn’t just any restaurant.  The 40-seat restaurant is the first nudist restaurant in Paris.

Patrons enter and are taken away from public view by a heavy curtain.  The second set of curtains ensures that nobody can peek inside.  Obviously, guests can stash their clothes while dining.

The first to dine at the restaurant were members of the Paris Nudist Association.  Apparently, the nudists loved the ambiance.

Le Parisien talked to the restaurant’s managers about the opening:

They supported our initiative from the beginning. We booked them for the first night, and apparently, they are very happy with the result.

Thankfully, waiters and chefs (seems only sanitary).  According to Lonely Planet, the menu is high gourmet.  Some items include shredded whiting, duck foie gras, escargots and crème brûlée.

O’naturel is already in a good spot; its location in the 12th arrondissement puts it close to Bois de Vincennes park, which has a dedicated naturist spot and a swimming pool with a regular nudist nights. France has long been a top destination for nudists and there is a drive amongst some in the community to get younger people interested in the lifestyle.

Neighbors close to the restaurant say they are not offended by the new addition.  From one neighbor, “When we learned what was going to be here, obviously it made us laugh. Especially since there is a nursery next door.”

Believe it or not, O’Naturel is not the first nudist restaurant to open.  Previously, both Tokyo and London attempted to create a naturist dining experience.  The restaurants, however, did not last long.

Well, the French have been comfortable with nudity for a long time. Thus, we can imagine that O’Naturel is destined to flourish.

So, would you dine at O’Naturel?