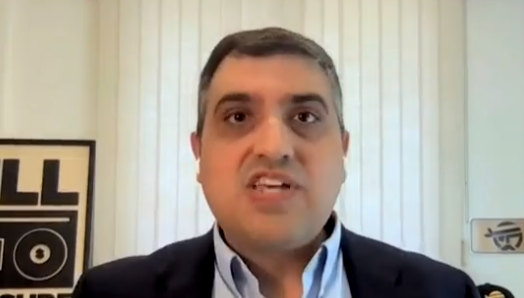 I feel like MSNBC guest Roben Farzad made host Katy Tur regret inviting him on after he humiliated, not only himself but the entire show.

Farzad launched into his own rendition of the Backstreet Boys hit “Quit Playing Games With My Heart” during a Wednesday afternoon segment when Tur asked him how the oil companies must have felt after Biden mocked them.

“He’s mildly sensitive. I didn’t know they’d get their feelings hurt that quickly,” Biden said at the White House when a reporter asked about Wirth’s rebuttal.

Reporter Mike Memoli focused on Biden’s comments about the gas companies, noting that the president has often criticized them for taking in profits while Americans struggle to fill their tanks. “You heard him talk about the oil companies who are making record profits at a time that Americans are increasingly concerned about record costs,” he said.

That’s when the singing started…

“Did you see this back and forth between Biden and the CEO of Chevron, and kind of his emotions?” Farzad asked. “It was so touchy feely, and I could see, if the oil executives had, kind of more chill to them, they’d be like ‘quit playing games with my heart, with my heart.’”

“I mean, it’s hard. You want to plan, you want to build refineries, you shut things down. And Biden, in one breath, wants to tell you ‘you guys gotta be patriotic, you gotta do more.’ In the other breath, he wants to decarbonize, and you can’t just say let’s just flip these things back online,” he explained.

“You can’t just go and say let’s flood the market with all of these refined products. We have a refinery bottleneck right now. This takes years of visibility and years of guidance that the White House is pretty loath to give.”

Tur admitted that her guest’s weird singsong response there her off.

Farzad did make a somewhat valid point after his little musical number—Biden’s green push is too aggressive. He’s demanding they produce more but banning them from digging new lines.

He’s also pushing the US towards renewable energy when most Americans can’t just go out and buy a new electric car.

I just want to offer a professional hat-tip (and hats off) to DailyWire’s Virginia Kruta for catching this strange piece of trashcan gold.