Representative Marjorie Taylor Greene has been making waves ever since she began running to become a member of Congress.

Just like each and every one of us, she has said things in the past that she no longer believes in today.  However, unlike our friends on the left, everything she has ever done or said can, will, and is being used against her.

While Democrat members of Congress can funnel millions to their lovers from their camping funds, if you are a grassroots candidate looking to put America First, you get removed from your committee assignments.

Don’t worry, she ends up getting the last laugh …

Yahoo had the ‘totally unbiased’ report of what the Democrat Congress did to MTG:

”The House voted on Thursday to remove Rep. Marjorie Taylor Greene, R-Ga., from her committee assignments after Republican leadership failed to punish the freshman congresswoman’s embrace of bizarre conspiracy theories and endorsement of violence against Democrats.

The resolution to strip Greene from her seats on the budget and the education and labor committees passed 230-199, with 11 House Republicans joining Democrats in voting for Greene’s removal.

In a fiery speech on the House floor shortly before the vote, Majority Leader Steny Hoyer, D-Md., excoriated Republican leadership for ignoring Greene’s incendiary rhetoric. Hoyer displayed a poster showing one of Greene’s Facebook posts that included an image of her with an AR-15 alongside Democratic Reps. Alexandria Ocasio-Cortez, Ilhan Omar and Rashida Tlaib above a banner that read “Squad’s Worst Nightmare.”

“They’re not ‘the Squad.’ They’re Ilhan. They are Alexandria. And they’re Rashida. They are people. They are our colleagues,” Hoyer said. “This is an AR-15.”’

Well, now Representative Greene is back and this time she has a mask that I bet 60% of the country or so would love …

Marjorie dropped her “Censored” work mask for a new look on Thursday … take a gander at this: 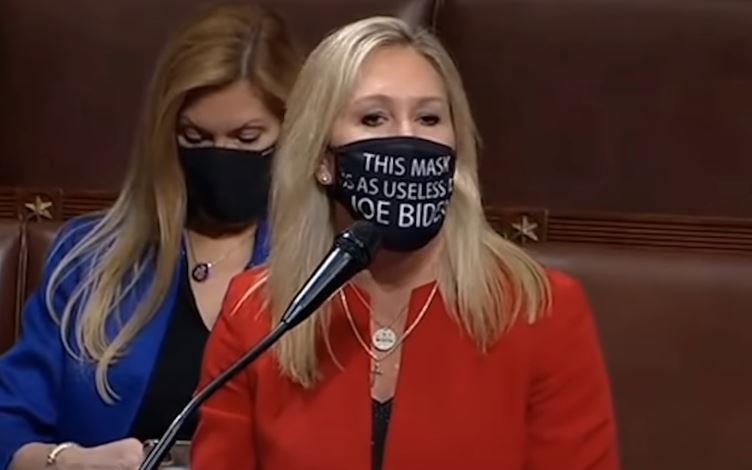 Via The Palmieri Report:

It’s nice to know there are still some people who are willing to stand up to the machine, no matter that doing so will likely cost her dearly.

Where do I get one ?

If/when you find out, please post, so that I can get one also!

Check out Amazon. I just got one!!

This Congress woman speaks like an American, to bad for those 11 Republicans who don’t have an American backbone! Georgia should be proud to have her representing them in these hard & difficult times. Indiana is proud to have Rep. Marjorie Greene in the House!!

If it did not take courage to do what those 11 Repubs did, more congress persons would have voted to axe her

I BELIEVE THOSE THAT VOTED AGAINST MRS.GREEN WILL LIVE TO REGRET IT./YET YOU LET THE SQUAD DO A LOT WORSE.SHE DIDN’T PAY HER LOVER MILLIONS OF AMERICA $$$$$$$$

Although it will make you feed good about yourself if you’re a Republican, to pit the Republicans against the Democrats is to be entrapped in the wrong paradigm and the wrong debate, which will never produce the desired results – that is, America’s salvation from the precipice she presently teeters on. Furthermore, it only helps in diverting Americans attention from the real battle – that is, America vs. the United States of America.

That’s right, America and the United States of America are not same thing. Not even close!

In fact, early 1600s America whose governments of, by, and for God were expressly established upon the Bible’s immutable moral law (and thus responsible for Americas former greatness, per Deuteronomy 28:1-14) was sacrificed on the altar of the late 1700’s America whose humanistic government of, by, and for the people is based upon capricious man-made Enlightenment and Masonic traditions (aka the biblically seditious Constitution, responsible for sending America to the precipice, per Deuteronomy 28:15-68).

For more regarding these two polar opposite forms of government, see Chapter 3 “The Preamble: We the People vs. Yahweh” of free online book “Bible Law vs. the United States Constitution: The Christian Perspective” at Bible versus Constitution dot org.

Be sure to check out our Constitution Survey in the right-hand sidebar by which you can obtain a free copy of the 85-page “Primer” of “BL vs. USC.”

Ted Weiland, if you think for one minute that you or a huge group of people like you are going to turn the U.S.A. back to the 1600’s you are more radical than the Muslims. Just because the Muslims are living in the past doesn’t mean Americans have to follow in their footsteps. I too hate the way America has been heading since the 1950s but I also don’t want to return to the 1600s.

Yes, and Ted is a dangerous messenger of anti-biblical truths. He is twisted in his thinking about God’s truths in His Word. Beware of the false preacher.

Would love a mask like this except I don’t wear face diapers!

What a pleasure you must be to meet in the street Jaran. Are you such scintalizing company that its worth it to breath in your contaminatedn gasses just to bask in the glow of your magnificence. Think again MacDuff………

Go Greene! You are the greatest!

They have no right to reprimand her. She has the right to speak her mind and to chose what she wears!!! Thank you, thank you Marjorie Taylor Greene for standing up for the people. No, we do not want the House to pass a bill with all of this fluff for the Democrats’ use!!! If they can’t manage their states, then they need to get someone in who can. We do not plan to pick up the slack for mismanagement of government $$. Nor do we plan to pay for all ofthe other fluff in this bill.

bobbie do you mean the American with the horns on his head, that American. Must be because she doesn,t stand up for me nor do I need her too Good thing she,s standing up for you because so far since she got to Congress she managed to, in short order get her wings clipped so that now she is a lame duck politician. Thanks to running off her big mouth. Do you suppose that any Comgressman or woman is going to rush accross the isle to share with her your States share of the relief money Washington is making available through the 1.9 trillion relief bill just passed. She didn,t make any friends in Congress on either side of the isle. Do you honestly believe that your State will fare as well with one of your reps in the dog house, honestly. And a place I might add she may as well get used to because she,s liable to be serving you mainly from there. Reality 101.

[…] LMAO: The Mask That Marjorie Taylor Greene Wore on House Floor Is Beyond Epic! […]

Equality Act, HR 1, open borders, we are witnessing the destruction of our beloved Constitutional Republic. What’s next? When the Constitution & Bill of Rights finally become irrelevant, not worth the parchment it’s printed on, then I suggest buying chickens and a donkey. Any questions, ask a Venezuelan about his/her standard of living, safety , security .

K23J88 Blah blah Witnessing destruction beloved constitution blah blah. In my 68 years of watching politice each and every time a Dem gov gets elected Its more of these assinine comments from sore losers who make the same ol tired claims as always. How many Dem governments might this herculean task take. Theres been dozens so far and……..no success yet. Give it a rest for Gods sake!!!

she has got truth on her side, and so far her mask has been right joe biden and all the dems have been worthless.

Worthless you say. Wasn,t it those worthless Dems who got you a 1.9 trillion dollar relief bailout, to the objections of EVERY ONE of the Rep Senators who delayed the bill as long as they possibly could. Now Rep Senators on the other hand they would never run off to a much needed family vaca in Mexico leaving all their worthless Dem colligues to freeze in the dark Texas winter with all their countrymen. As to voting against the relief bill you can be sure that Rep Senators with their salaries that would choke a horse and benefits definately fur lined, will be in need of the funds they tried to keep from you. I guess for the good of the country they say, well its easier for them than you No you people dont need this relief money its for you own good trust us. Not those worthless Dems who want to give you even more than this. Thank God we stepped in……for the good of the country you understand. Not like them worthless Dems………

We need MILLIONS more who feel this way to make it KNOWN just like this very BRAVE Woman! This is and has been a virus for sure BUT….the Liberal Media helped make this a POLITICAL PANDEMIC to support their bias, racist, greed and ILLEGAL ways!

Well I dont like her crap I voted Rep and my guy won!! I thought we would form the Gov. But we didn,t and now that its time for damage control The man I sent there is saddeled with this lame duck. My congressman is now being forced to support her little scenes. I know my State is going to get less of the relief money we should expect and instead of having an aly in the Congress he,s got her there with a target on her back 11 Reps voted against her, shes not a good bet for the future. I,m happy she doesnt represent my district. I bet you,d feel different if she represented yours.

behaving like a petulant wilfull child shame on her and shame on you her supporters, who enable this outrageous behaviour.

YES WHERE CAN I GET ONE AS WELL! WE DON’T RECOGNIZE BIDEN AS PRESIENT. WE SEE HIM AS THE “NARRATOR” OF THE WORDS FED TO HIM FROM THE BOSS. WHO THAT IS, IS UP FOR DEBATE. BUT MAKE IT KNOWN NO NOT 1 CONSERVATIVE ACCEPTS NOT GIVES ANY IMPORTANCE TO THE BIDEN SO CALLED ADMINISTRATION. IT’S A TOTAL FARCE.

You go girl!!!! MTG for President❤