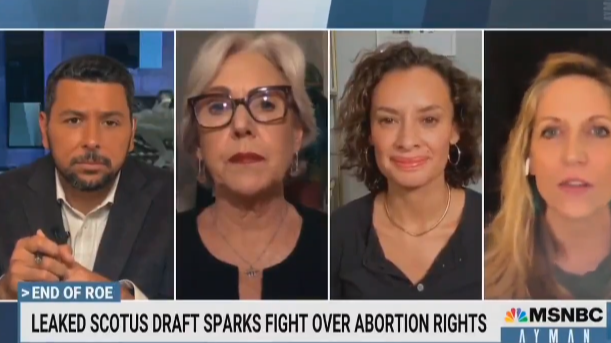 MSNBC guest Laurie Kilmartin told a panel on “Ayman Mohyeldin Reports” that the person who leaked the first draft opinion showing the Supreme Court voting to overturn Roe v. Wade was a “hero” to her, then explained that she wanted to make ‘sweet love’ to them in gratitude.

“Here’s my feeling about the leaker, I would like to find out who the leaker is so I can make sweet love to that person, because that person is a hero to me,” said Kilmartin, a standup comedian and writer for “Conan.”

“If the leaker is a Republican and if I get pregnant during our lovemaking, I will joyfully abort our fetus and let them know. I don’t know if that answered your question,” she added.

Later in the segment, she argued that when Roe gets kicked that the elderly members of Congress should go on a hunger strike:

“Well, this is controversial, but I think that every Democratic member of Congress who’s over the age of 87 should go on a hunger strike for abortion rights, because let’s face it, they don’t have much longer anyway. You might as well go out a hero in a blaze of glory. Be the Bobby Sands of abortion,” Kilmartin said in reference to the member of the Irish Republican Army who died after going on a hunger strike when imprisoned.

“You know I am a comedian. I know we have like two very serious answers and I’m just giving a joke, and everybody’s like, that’s a terrible policy. It is, guys. You don’t have to take me seriously,” Kilmartin added.

MSNBC guest says she wants to make sweet love to the SCOTUS leaker, then “joyfully abort the baby." pic.twitter.com/NNSU7B6ahD

The leaked draft opinion says that a majority of the Supreme Court is prepared to overrule the Roe v. Wade decision.

The opinion states there is no constitutional right to abortion and argues that “Roe was egregiously wrong from the start.” If the court does what the draft suggests, it would give states the power to decide whether to ban or heavily regulate abortions going forward.

The draft opinion rejects both Roe v. Wade and the subsequent Planned Parenthood v. Casey decision in 1992, which reaffirmed the Roe ruling.