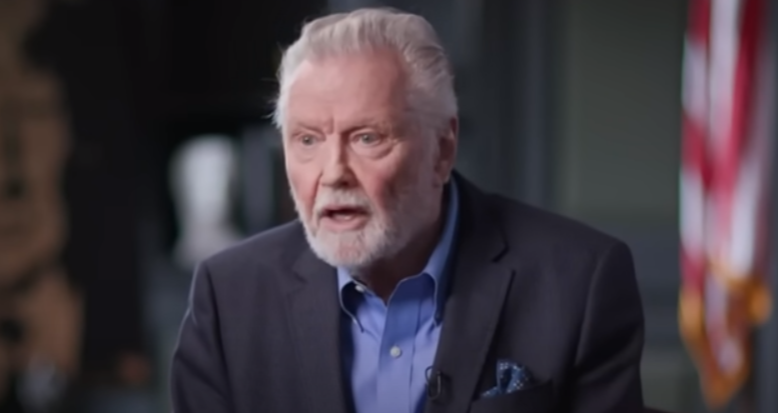 Actor Jon Voight recently interviewed Donald Trump on Newsmax Sunday. During the interview Voight made a major prediction for 2024—Trump will run again. The former president did not confirm the actor’s prediction but instead smiled as the two discussed the current plot to take him down.

Voight said that people are always asking if Trump will run again. The actor says he responds saying, “He certainly will run, but we can’t wait too long.”

The interview, which aired on Newsmax on Sunday evening, was interspersed throughout a special hosted by Voight telling the story of Israel. Under Trump’s presidency, the Abraham Accords, in which Bahrain and the United Arab Emirates moved to normalize diplomatic relations with Israel with the facilitation of the United States, were established. Trump was also responsible for the establishment of the U.S. Embassy in Jerusalem.

Trump told Voight he’s “always had a good relationship with people of the Jewish faith” and maintains a “great respect” for them.

“We love Israel, and we hope everything is going to be OK,” he continued, acknowledging some of the country’s current challenges.

Discussing the United States, the actor said to Trump, “I believe that there’s going to be a turnaround.” Trump questioned him, asking, “Is that hope? Or is that from your instinct?”

“If some very big things don’t happen very quickly, there can’t be a turnaround,” the former president claimed.

Trump has remained active on the political scene after leaving office, continuing to issue statements and endorse candidates across the country. He has held several rallies in various states supporting candidates ahead of primary battles and is set to hold more ahead of the November midterm elections.

Watch The Full Interview Below:

On Friday, Trump will speak to a crowd in North Carolina, followed by another in Michigan on Oct. 1. The former president has yet to make any announcement about his candidacy in 2024.

My last month paycheck was 13000 dollars… All I did was simple 0nline work from comfort at home for 5-7 hours/day that I got from this agency I discovered over the internet and they paid me 90 dollars every hour.
﻿for more detail…  https://indeedgold.blogspot.com/

Stay At Home Mom From New York Shared Her Secret On How She Was Able To Rake In $5000 Weekly From Online Work w20} Just 3 Weeks After Losing Her Old Job…
Read More…. http://bizpay1.tk

I actually have gained $53k honestly in a month and a half of manner of method of pretty honestly working pastime from zxs my laptop. Immediately even as out of place my remaining business, I come to be very troubled & in the long run I truly have placed this on-line (am-06) task wearing this out I can control to earn loads living at home. Each individual is able to do this pastime and get extra cash online going this
article———->>> https://netcareer54.blogspot.com/