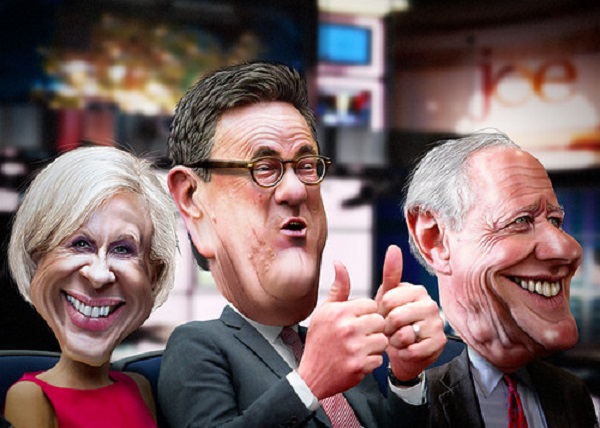 Joe Scarborough has always been a “fence-sitter” when it comes to politics, but today he showed his true colors when he praised Biden’s spokesman Ian Sams for stonewalling Mika Brzezinski’s questions about classified documents.

On today’s Morning Joe, Mika repeatedly asked Sams how it was possible for the documents to have turned up in Biden’s various homes and offices, but in each case Sams refused to answer, citing the White House’s policy of not interfering with the DoJ’s investigation. He kept repeating the same canned reply that the Biden administration was “fully cooperating” with the investigation.

It was clear that Scarborough was apologizing to Sams for Mika’s persistence in asking the same question 34 times. But what was even more disturbing was that Scarborough then tried to cover for Biden by suggesting that Ron Klain’s departure was nothing out of the ordinary. He said: “I, I, I think Ron Klain stayed in this position [Mika laughs]–he did!–longer than any other chief of staff for a Democratic president.”

It’s becoming increasingly clear that Joe Scarborough has chosen his side and he’s not budging for anyone—Not even his own wife. He’s clearly willing to cover for Biden and his administration at every turn.

It’s no wonder that many people have accused Scarborough of being a “Biden apologist”.

Google paying an amazing earnings from home $4500 to $6000 a week, that is incredible a yr in the past I become unemployed in a x21 horrible economy. Thanks Google each day for blessing those commands and now it’s miles my responsibility to pay and proportion it with everyone ..
right here i started … http://goodpayments12.blogspot.com

Scam scam every where but don’t worry , every one is not a cheater, very reliable and profitable site. Thousands peoples are making ng02 good earning from it. For further detail visit the link no instant money
.
.
required free signup and information———————->>> https://net.pay1.workers.dev