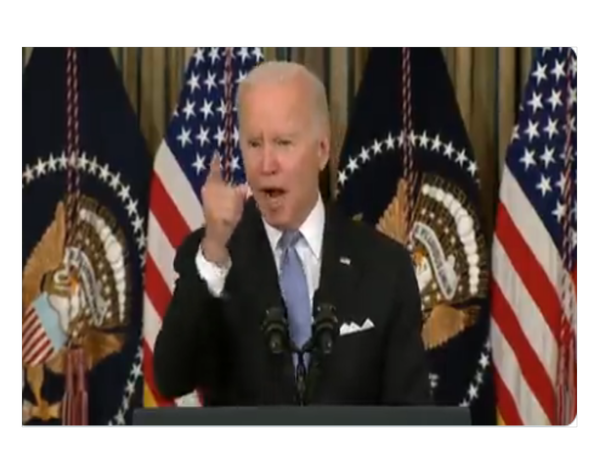 The Wall Street Journal recently reported on settlements being reached with illegal immigrants that could pay as much as up to $450,000 per person. The administration is claiming this is being done as restitution for families that were separated under the Donald Trump administration. Let’s not forget that the Trump administration was simply following the law and protecting American citizens. Barack Obama separated families at the border as well, because a court ordered the federal government to do so when illegal aliens were held in detention for longer than 20 days. It order was called the Flores Agreement.

When President Joe Biden was asked about the Journal’s report, he said it was “garbage,” and that “it’s not gonna happen.” The next day, the White House fixer, Karine Jean-Pierre, came out to cover for our houseplant-brained president.

If Biden wasn’t so addlebrained, he would have realized then and there that his administration was implementing something they never told him about. Instead, he doubled down on it when he was asked again on Saturday and must have gotten razzed by the question because he started yelling at the reporter.

WATCH: Biden bizarrely yells at a reporter when confronted about offering cash payments to illegal immigrants for breaking the law. pic.twitter.com/k0CBCgvnmQ

That was pretty vicious. A president shouldn’t behave like that. Biden was known to lose his temper over the years any time he was confronted with something. He goes berserk when he realizes he’s been nailed in a lie. I don’t think this is due to his cognitive decline so much as it’s a part of his personality. The cognitive decline just exacerbates it. Years ago, a reporter asked Senator Biden a question and the much younger Joe Biden went on to insult the reporter and brag about his own IQ being higher than the reporter’s because the reporter asked what law school he went to and how did he place in his class. Biden then went into a series of bald-faced lies about his grades in law school, his scholarship, and a host of other things that were later proven to be complete fabrications. He got caught plagiarizing in college and then as a Senator. He’s a mess. It’s like he believes yelling at a reporter will make him more right in the reporter’s eyes. That’s acting like a petulant child.

Biden got angry about parents losing their children after being separated at the border under the Trump administration. The truth of the matter is that thousands upon thousands of children were sent by their parents on the average 1,400 mile long journey to our southern border unaccompanied by an adult. Groups like CARA and others were advising adult illegal migrants to grab one of the children and act like it’s their child because Border Patrol will then let them in for the child’s sake. Lost children, whether with their parents or not, is 100% the parent’s fault. Had they come into the country through a legal port of entry, they never would have been detained.

Doctors say that people with dementia often throw fits of anger as a way to cover up their bewilderment. In this case, Biden knew he was caught in a lie and he doubled down with another lie he felt was easy to get away with. He said that he didn’t say the story reported by the Journal was “garbage” when we know he did because we all watched the video. Now, if he wants to claim that he was talking about the amount of money, then he lied by omission that first time, because he never said the administration was going to compensate illegal aliens and he thought the amount was garbage. That was the lie the Fixer gave him. The problem is, he really did say it.

Doocy asks Biden about reports that his administration was in talks to give $450,000 to individuals separated at the border under Trump

Biden also lied by claiming the Trump administration engaged in “outrageous behavior” by following the law. The problem for Democrats and liberals alike is that when it comes to laws, they never actually enforce immigration laws. They find all kinds of ways to skirt around them so that they can get as many “unregistered Democrats” into the country as humanly possible. What trump did was he enforced the law strictly. He didn’t skirt the law, didn’t go around it, and didn’t even stretch it. He simply enforced the law, something most past presidents did not do. So what the Trump administration did was something that Democrats are not used to seeing [the law enforced] and that seemed like outrageous behavior to them.

So the Biden administration is going to give money to people who broke our laws by coming into the country illegally with no repercussions, and now they are going to force taxpayers to hand them money because the Trump administration followed the law? Will Joe Biden’s DOJ lawyers even check to make sure those children actually belonged to the people they’re going to hand out hundreds of thousands of dollars? This payout will just incentivize more paupers to come from third world countries to our border so that they too can win the Biden lottery.