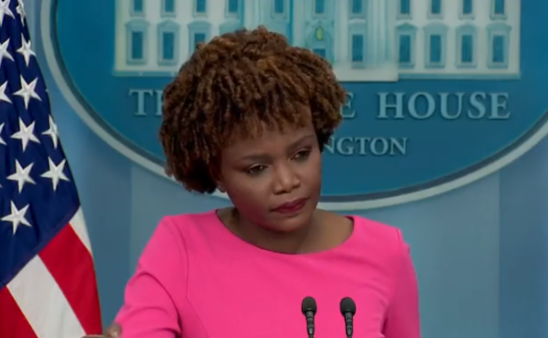 Joe Biden continues to show severe signs of cognitive decline. The man is old. He’s likely senile. He doesn’t understand what’s going on in the world and seems to lack the ability to remember things.

Last week, Joe Biden spoke regarding an initiative on hunger, nutrition, and health that was in part led by Rep. Jackie Walorski. After mentioning her to thank her for her efforts, he asked where she was, “Jackie, are you here? Where’s Jackie? I didn’t think she was.”

The problem with that? Jackie Walorski is dead. She died in a car accident months ago.

White House Press Secretary Karine Jean-Pierre was then forced to answer for this bumbling idiot once again to explain what he did and why he did it.

So the President was, as you all know — you guys were watching today’s event, a very important event on food insecurity. The President was naming the congressional champions on this issue and was acknowledging her incredible work. He had — he had already planned to welcome the congresswoman’s family to the White House on Friday. There will be a bill signing in her honor this coming Friday.

So, of course, she was on his mind. She was of top of mind for the President. He looks — very much looks forward to discussing her remarkable legacy of public service with them when he sees her family this coming Friday.

The reporter pushed back citing, he said, “Jackie, are you here? Where’s Jackie? She must not be here.”

KJP replied, “No, I totally understand. I just — I just explained she was on top of mind. You know, this wasn’t — what we were able to witness today and what the President was able to lift up in this — at this conference at this event was how her — her focus on wanting to deal with, combat food — food insecurity in America. And this is something that he was lifting up and honoring.”

I underlined the part above that had to do with the actual question so you can see how she shifted away from actually answering it. She was at the top of his mind. Okay. Fine. But that doesn’t explain why he was asking where she was. That’s not what we do in life as humans. We don’t look around the room for dead people so as to acknowledge them even if they’re at “top of mind”. Dead people don’t go anywhere. They don’t attend events.

.@CeciliaVega: "What happened at the Hunger Event today? [Biden] appeared to look around…for…a member of Congress [Jackie Walorski] who passed away last month…What happened there?"

.@CBSNewsRadio's @StevenPortnoy: "Can you explain where the mistake was made? Did the President–was [he] confused? Was there something…in the teleprompter…he didn't recognize? Can you just help us understand?"

KJP: "I mean, you're jumping to a lot of conclusions" pic.twitter.com/rrvZyFKUJ0

KJP: "I don't find that confusing. I think many…can speak to [that]…That is not an unusual scenario" pic.twitter.com/TsRlSlhsJQ