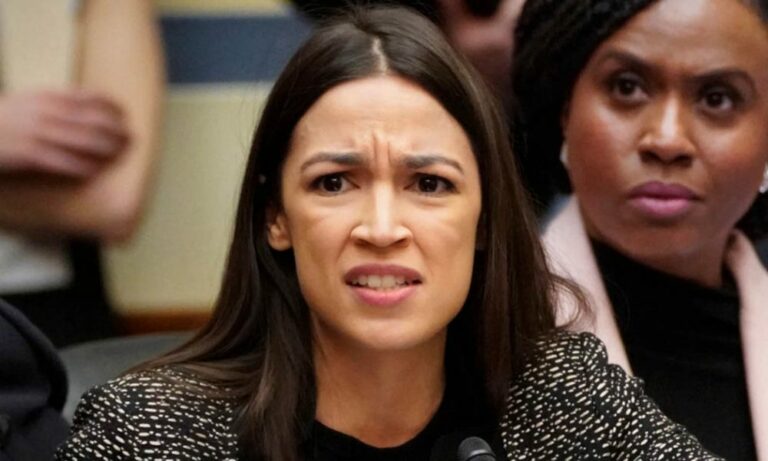 Guys, I know Rep. Alexandria Ocasio-Cortez was thrown through a loop Wednesday when a group of hecklers demolished her socialist behind. These were her voters and NOT conservatives. One man shouted that he voted for her and that she is ‘the establishment’. The hecklers shouted down AOC for supporting the war in Ukraine and in essence, for supporting nuclear war—Potentially World War III.

The young hecklers know that they’re in a fight for their lives and I couldn’t be more proud of them.

“Congresswoman! None of this matters unless there’s a nuclear war, which you voted to send arms and weapons to Ukraine,” one protester shouted, according to a video posted on Twitter.

The heckler began yelling at Ocasio-Cortez (D-NY) during the Q&A portion of the event, criticizing the Democrat’s support for sending military aid to Ukraine as it attempts to ward off a Russian invasion.

“Tulsi Gabbard, she’s left the Democratic Party because they’re a bunch of war hawks,” the heckler continued. “You ran as an outsider, yet you’ve been voting to start this war in Ukraine. You’re voting to start a third nuclear war with Russia and China. Why are you playing with the lives of American citizens?”

“You have done nothing! Tulsi Gabbard has shown guts where you’ve shown cowardice,” the man shrieked, pleading with AOC to “denounce” the Democratic Party like Gabbard did earlier this week.

My friend @Noggatone and I confronted Congresswoman @AOC on her support for Nuclear War and Ukrainian Nazis. I call her out for being a coward in the face of the party that will push us all into Nuclear war right now. Will she stand up like @TulsiGabbard and fight for peace? pic.twitter.com/aQiQvQSWIN

Ocasio-Cortez voted in favor of sending military and humanitarian aid to Ukraine earlier this year. AOC appeared to respond to the second protester, but her words were not clear in the video posted online.

Ocasio-Cortez voted in favor of sending $40 billion in military and humanitarian aid to Ukraine earlier this year.