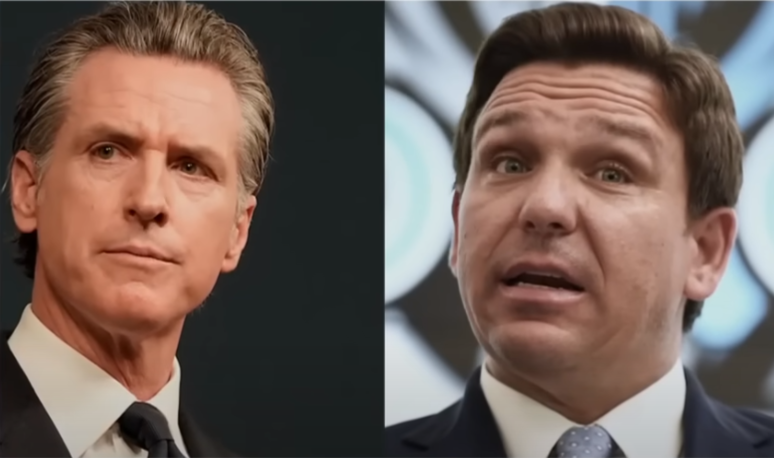 California Governor Gavin Newsom’s own family puts their money on Ron Desantis. Reports show that his in-laws donate strictly to the GOP and do not share Newsom’s sick agendas.

According to contribution records on the Friends of Ron DeSantis PAC website, the Siebel Family Revocable Trust made a $5,000 contribution on April 6, 2022. That trust is run by Kenneth F. Siebel Jr. and Judith A. Siebel, the parents of Newsom’s wife, Jennifer Siebel, records obtained by Fox News Digital show.

Neither the Siebels nor Gov. Newsom’s office immediately responded to Fox News’ requests for comment. The DeSantis campaign declined to comment.

Newsom’s father-in-law Kenneth Siebel has a long history of making donations to GOP candidates, according to Federal Election Commission filings. His most recent donations include contributions to the campaigns of Republicans Sens. Ron Johnson, Tom Cotton and Josh Hawley.

I mean… his father-in-law knows his stuff. What can you say? Newsom is the man that his daughter married and he’s not getting his own family’s money to support his crazy liberal agendas.

The reality is, that this matchup might very well end up with the 2024 presidential hopefuls.

“I’m sure he’s humiliated because of how aggressive he’s come out against Ron DeSantis,” conservative radio personality Clay Travis said on an appearance on Fox News on Wednesday. “There’s a possibility guys, that this could be a presidential election in 2024 or 2028. These guys don’t like each other. And they have such diametrically opposed perspectives when it comes to COVID.

Newsom must be humiliated because he’s really gone after DeSantis personally even beginning people for their money to end DeSantis’s career:

“Time to make Ron DeSantis a one-term governor,” California Governor Gavin Newsom wrote today of the Florida leader. Newsom proposed to do so by donating $100,000 to DeSantis’ opponent in the November midterm, Rep. Charlie Crist (D-Fla).

Newsom posted the statement on Twitter along with a link to an ActBlue fundraising page and the prompt, “Who will join me in helping Charlie become the next Governor of Florida?”

Who will join me in helping Charlie become the next Governor of Florida? https://t.co/YvpkkGKkOb

The Florida governor shot back at Newsom in July saying, “When families are uprooting from the Pacific Coast to go almost 3,000 miles in search of a better life, that’s telling you something.”

“Yes, we’ve created a citadel of freedom here that has attracted people, and we’re proud of it. But, let’s just be clear, California is driving people away with their terrible governance,” he added.