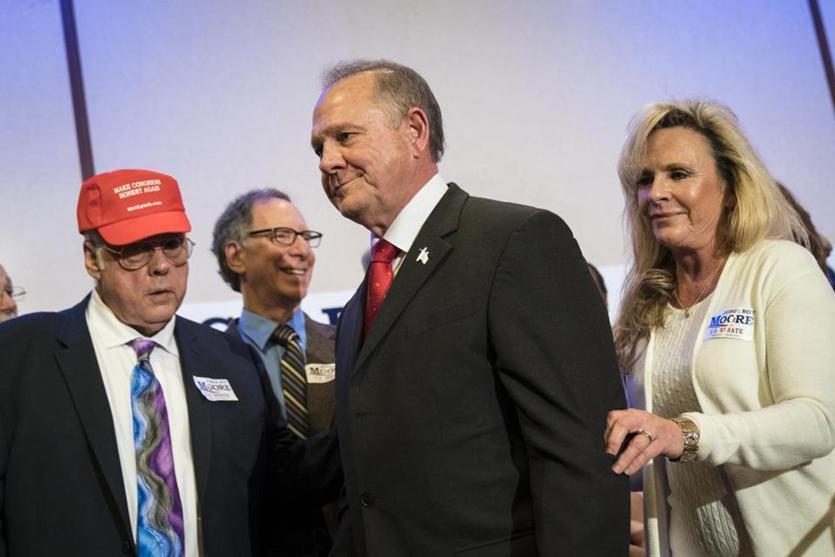 From the Boston Globe:

WASHINGTON — Allegations that Roy Moore sexually assaulted teenage girls decades ago have turned many Republicans against their party’s Senate candidate in Alabama, but one bloc of conservative leaders is standing by their man: evangelicals.

It is the latest example of a shift in attitude among Christian conservatives, who polls show are increasingly willing to overlook sexual misbehavior if a political leader is firmly committed to opposing abortion, gay marriage, and transgender rights.

In today’s hyperpartisan environment, ideology trumps personal transgressions for these religious leaders, who years ago called on President Clinton to resign over his liaisons with White House intern Monica Lewinsky.

Now, conservative evangelicals have rallied to the defense of Moore, a former chief justice of the Alabama Supreme Court who once defied court orders and kept a memorial of the Ten Commandments in the state judicial building. To his evangelical supporters, Moore is a victim of a media witch hunt.

“The hypocrisy of Washington has no bounds,” said Franklin Graham, the powerful evangelical preacher and son of Billy Graham. “So many denouncing Roy Moore when they are guilty of doing much worse than what he has been accused of supposedly doing.”

Over the last week, the Globe called dozens of evangelical pastors in Alabama and elsewhere who had supported Moore before the allegations emerged, gleaning from a list of names posted to the Facebook account of the candidate’s wife.

Repeatedly, the pastors attempted to discredit Moore’s accusers in personal terms, with some dismissing their emotional stories as “crocodile tears” and “fake news.”

“I don’t know how much these women are getting paid, but I can only believe they’re getting a healthy sum,” said pastor Earl Wise, a Moore supporter from Millbrook, Ala.

Wise said he would support Moore even if the allegations were true and the candidate was proved to have sexually molested teenage girls and women.

“There ought to be a statute of limitations on this stuff,” Wise said. “How these gals came up with this, I don’t know. They must have had some sweet dreams somewhere down the line.

For 40 years, “these women didn’t say a word. They were cool as a cucumber,” said pastor Franklin Raddish, a Baptist minister from South Carolina and a Moore supporter.

“You’re asking me to believe them,’’ Raddish said, “when their own mother didn’t have enough red blood in her to . . . go and report this? Come on.”

The statements are indicative of a broader shift among conservative evangelicals — and particularly white evangelicals. Long thought of as a voting bloc that demanded their lawmakers to be pious and spiritual, some are now even more accepting of a lawmaker’s personal indiscretions than the average American, polling data indicate.

Eighty percent of white conservative evangelicals voted for Trump, according to 2016 election exit polls, even after the infamous “Access Hollywood’’ tape and the numerous allegations from women who said that he sexually assaulted them.

Six years ago, just 30 percent of white evangelical Protestants believed an elected official “who commits an immoral act in their personal life can still behave ethically and fulfill their duties” as a public servant, according to The Public Religion Research Institute, a nonprofit polling firm focused on faith issues.

“You look at the shift made from conservative white evangelical leaders between their condemnations of Bill Clinton in the late 1990s and their total dismissal of the charges against Donald Trump in the 2016 campaign, it’s a pretty stark turnaround,” said Kevin Kruse, the Princeton professor and author of a 2015 book about the political reach of the religious right.

Analysts interviewed for this story, which include members of the evangelical community, attribute the change to several factors.

The focus on issues such as abortion rights and same-sex marriage has wedded some evangelicals to the Republican Party, they said, which means supporting a Democrat is nearly unfathomable.

Also, as the conservative evangelical movement has grown in political power, the group is increasingly focused on getting policy results.

With Trump, evangelical leaders justified their support because a Republican president would mean a social conservative could fill the then-vacant Supreme Court seat.

Trump rewarded them with the nomination of conservative Neil Gorsuch, who is widely believed to be opposed to abortion and who once wrote “the intentional taking of human life by private persons is always wrong.”

“This is really a case of the ends justifying the means for them,” Kruse said. “It no longer matters about the personal characteristics of the leader anymore.”

The conservative movement has lost its “prophetic voice” and “moral high ground,” said Randall Ballmer, a historian of American religion.

“In this case, you have a movement that has so totally embraced a particular political party, that it’s willing to go along with any outrage as long as it’s within the tent of party,” Ballmer said.

This is not true for every group. Black evangelicals in the South, although similarly bullish on opposing abortion and same-sex marriage, have not embraced the Republican Party in similar numbers. And some influential white Christians are denouncing Moore.

“As an evangelical Christian, an Alabamian, and a Republican, I’m ashamed of Roy Moore,” wrote William S. Brewbaker III, a law professor in Alabama who, in a New York Times op-ed article, denounced the evangelicals defending the former judge.

Before the election, there were also some evangelicals who publicly condemned their religious denominations for embracing Trump.

Lawrence Ware left the evangelical Southern Baptist Convention in July over what he saw as a Trump-induced compromise of the group’s religious values. Reached by phone, Ware said he was disappointed by the faith community supporting Moore.

“The moral majority has shown themselves to be morally bankrupt,” said Ware, a professor at Oklahoma State University. “Their way of thinking is so antiquated, so deeply problematic . . . they have no moral weight anymore.”

However, for the evangelical pastors interviewed by the Globe, the greater sin is socially liberal views. These Southern ministers frequently cited the abortion rights and transgender rights views of Moore’s opponent, Democrat Doug Jones, as reasons why they have a solemn duty to back the Republican in the race, no matter his alleged faults.

Pastor Jim Nelson, who leads Church of the Living God in Moulton, Ala., cited Jones’s position on abortion. “I just can’t embrace that or vote for somebody who promotes that in our culture,” he said.

Nelson said he has known Moore for 20 years, and while he’s shocked at the recent allegations of sexual misconduct, he will probably still be voting for him.

Several pastors also mentioned Moore’s cult-hero status in the conservative evangelical community, after he twice was removed from public positions because of his religious activism.

“I believe he’s a Christian man, and he has a proven track record on that,” said pastor Rick Simpson of Summit Holiness Church in Alabama, who still supports Moore “110 percent.”

Raddish, who leads multiple Baptist ministries throughout the South and has previously been involved in Alabama politics, said there is no proof to the allegations against Moore.

“What we’re doing now is just convicting people and executing them, lynching them in the public square over allegations,” Raddish said. “We have the greatest judicial system in the entire world . . . but we’re acting like China and Russia right now.”

He invoked several racial terms throughout the interview. In addition to saying Moore was being lynched, Raddish said the Republicans who were turning on Moore were just “political field hands picking cotton on the Democratic plantation.”

“John McCain is the overseer,” he said. “Mitch McConnell and Paul Ryan and the rest of them are the political field hands.”