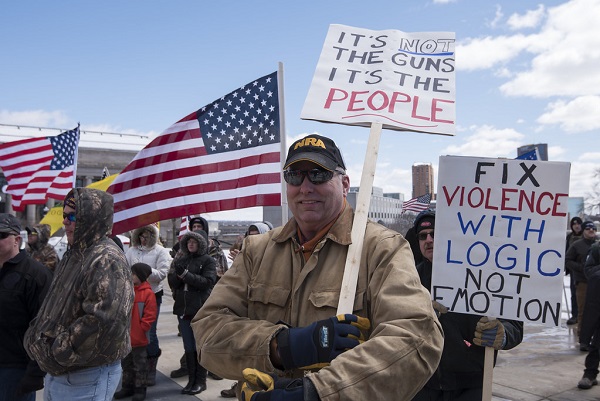 After the recent deadly mass shooting in Boulder, Colorado, the gun grabbers are back and they’re angrier than ever with new demands for universal gun background checks throughout the United States, even though years of data show that nearly all major mass shooting events would never have been stopped by the anti-gun policies they propose.

The Boulder shooting happened only a week after the Atlanta mass shooting, both of the shootings claiming 18 lives. There were two crazed shooters responsible for both incidents. Two people. Yet Democrats want to punish about 144 million innocent American gun owners who have never shot anyone, most of who own a gun for their own protection from bad guys like the two lunatics who shot up Boulder and Atlanta, criminals, and Democrats who want to take all of their freedoms away.

President Joe Biden himself called on lawmakers to “close the loopholes in our background check system,” including what’s popularly known as the “Charleston loophole,” through which individuals can purchase a gun without a background check if the FBI fails to process the check within three days of receiving it. The problem is by closing the loopholes Biden means to make it nearly impossible for innocent Americans to purchase a gun.

There are two bills passed by House Democrats, one of which is HR-8 that prohibits “a firearm transfer between private parties” without a background check because Democrats do not want Americans to be able to make their own adult decisions and carry out innocent transactions like selling firearms to one another.

A well regulated Militia, being necessary to the security of a free State, the right of the people to keep and bear Arms, shall not be infringed.

Can someone please point out to me where it says the government has the authority to do a background check? The final clause of the Amendment says that the federal government cannot even have a conversation about infringing on the rights of American citizens to keep a firearm and to bear it.

Don’t get me wrong.  I want a background check to stop criminals from getting guns. Make them pay street corner prices, which is exactly what they will always do whenever the government creates gun control laws that only stop law-abiding citizens from having guns. The criminals can pick them up anywhere they want while the non-criminal saps will have to be unarmed for them to attack. Criminals do not obey laws, because, well, they’re criminals. Duh.

The other bill is HR-1446 that seeks to increase the waiting period from three days to twenty via the Charleston loophole.

The saddest thing of all is that not one member of the mainstream news media will ever ask these Democrats if the gun control laws they’re creating are Constitutional. They’re not. But even if they did ask, the Democrats would say “oh of course they are, you silly reporter,” and the silly reporter would not give a follow-up question to ask how the gun control bill does not infringe on Second Amendment rights. Rather than give an honest answer, the Democrat would more-than-likely go off on a tangent about the number of shootings that are taking place and how we must stop them and they would completely avoid the question because any gun control measure the Democrat herd comes up with is an infringement. They know it, and they don’t care.

With all the screaming, hooting, and hollering coming from anti-gun nuts pushing for expanded background checks, reviews of data for major mass shooting incidents over several years shows what the gun nuts are asking for would have little to no effect on mass shootings.

I think they just want to feel good about themselves while they violate the Constitutional rights of law-abiding citizens.

The New York Times did a review of 20 mass shootings and they learned that “a vast majority of guns used were bought legally and with a federal background check.” The Democrats would just say that the process needs to be the punishment and would increase gun control that doesn’t work even further.

According to the Times’ analysis, just a few of the shooters got their firearms without passing federal background checks. One of them was the shooter who murdered nine people in a black church in Charleston, SC back in 2015. He was able to purchase the gun when the FBI failed to do his background check in a timely manner, that’s how the Charleston loophole got its name.

In the Sandy Hook school shooting massacre that happened in 2012, the shooter got his weapon by killing his mom and stealing her guns. I doubt a background check would have stopped that. Besides, her guns were purchased legally.

The Democrats will not be happy until only the criminals, police, military, and rich people’s bodyguards are allowed to own firearms while the rest of us will have to live like it’s Venezuela.