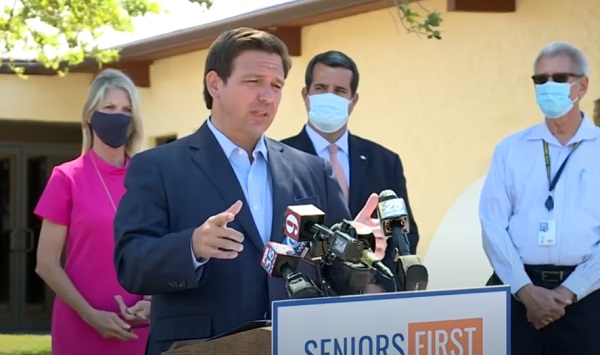 Florida Gov Ron DeSantis is running for reelection and remember, the left is completely Terrified of him. They’ve launched a smear campaign to scare away voters claiming that he is ‘worse than Trump’, whatever that means.

Some folks in the media have compared him to Hitler simply because he’s banned Critical Race (baiting) material in Florida’s public schools.

Just Tuesday, ‘The View’ found themselves lying about DeSantis and his campaign funds. The cast accused the Governor of grifting donors and setting them up for automatic recurring charges.

It was a flat lie. I checked, and his site does NOT automatically sign anyone up for automatic charges. There is a box you can check, but you have to do so manually.

“For folks who aren’t familiar, what a lot of these apps and websites do is you click to give once, and it actually signs you up to recurrently give. It is so unfair. It is a grift. It is terrible,”  Alyssa Farah asserted.

She was backed up by co-host Sunny Hostin who claimed, without evidence, “people are losing their homes” and “losing their savings” because of him.

Here is their shady little segment:

Faux GOPer Alyssa Farah Griffin accuses FL Gov. Ron DeSantis of scamming his supporters of donations. "It is so unfair. It is a gift. It is terrible," she says.
"Who are these people giving money to these people?" Sunny Hostin exclaims, suggesting "people are losing their homes." pic.twitter.com/9hHv0gfPsc

DeSantis usually doesn’t respond to the rumor mill that is ‘The View’, but this is a particularly damaging lie so during a briefing he decided to address it.

DeSantis wanted voters to know that he acts as a ‘good steward’ and that he values all of his supporters:

“You know, I got accused by some of these people on one of these shows about, “oh, he’s raising all this – people want to donate to him.” And they tried to say that like, we had auto-donate where it keeps going every month. We do not do that in my [campaign].

You donate. Fine. You can click a button to make it auto. We do not do that auto, because we don’t want people to have these charges if that’s not something they didn’t agree with.

So, they tried to act like I was doing that. And then some of these media went and said, “Wait a minute, he’s not doing that.” They were lying about that. We do not do that.

At the end of the day, you know, we have folks who – some people are on fixed income, very limited and they will donate a certain amount. And that’s very meaningful. You know, not everybody has the capacity to write these big [donations].

So, you see that. And so, we’re very good stewards. But we would never do automatic unless you personally as the contributor press that button.

And so, I think it’s very important, particularly as Republicans when you’re raising money amongst your own people, that you’re doing that in a way that has honesty.

And so, my name is being used to trick people into providing donations to something that they don’t necessarily want to do. That is definitely wrong.”

I can respect that DeSantis doesn’t normally stoop to these clowns’ level but it’s certainly good that he called them out on their lies, for once.

It’s these types of dirty tactics that slowly chipped away at the people’s trust in the media.