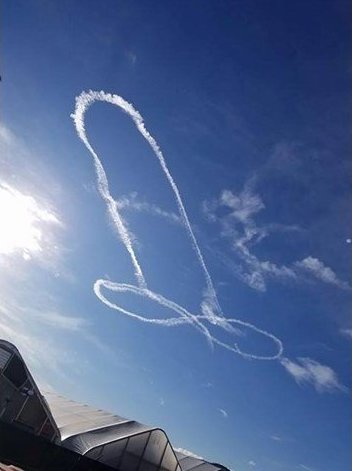 While flying over Okanogan County, Washington, a Navy crew made giant sky drawings of penises, and they’re going to be held accountable for their obscene actions.

The drawings appeared Thursday evening, attracting attention from locals like Ramone Duran, who told the Spokesman-Review newspaper he was running errands when he saw a jet start to make designs in the sky, adding:

“After it made the circles at the bottom, I knew what it was and started laughing. It was pretty funny to see that. You don’t expect to see something like that.”

Other people weren’t as excited, like the one mother who told the local tv station KREM that she was upset the drawings might force her to have a conversation about male anatomy she wasn’t prepared for. The jet responsible for the contrail took off from the Naval Air Station Whidbey Island.

In a statement to KREM, Navy officials have apologized for the obscene sky drawings:

“The Navy holds its aircrew to the highest standards and we find this absolutely unacceptable, of zero training value and we are holding the crew accountable.”

Meanwhile, the Federal Aviation Administration told the station there’s nothing they can do unless there’s a safety risk, adding that the agency “cannot police morality.”

But Mother Nature seems to have a saucy sense of humor as well, based on the gallery of cloud penises below.