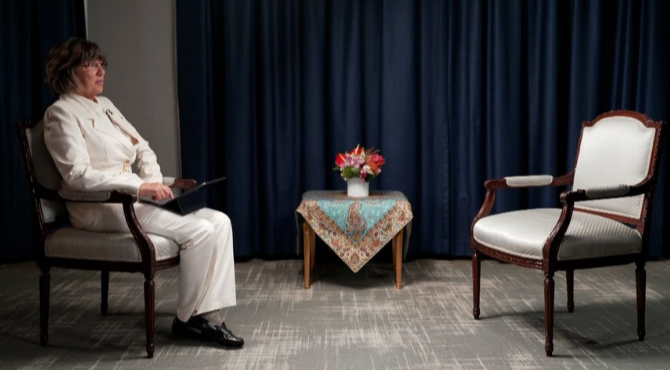 CNN Chief International Anchor Christiane Amanpour walked out of an interview with Iranian President Ebrahim Raisi and it’s the why that’s so shocking.

Raisi is under global scrutiny right now over violence against the women in his country for not wearing their headscarves correctly. The Iranian president refused to sit down with a woman in America who was not wearing a hijab and the CNN reporter showed more integrity at that moment than her entire network has for years.

Amanpour explained later in an interview with her network that she has interviewed every Iranian president since the yearly 90’s and has never been asked to wear a hijab on American soil. It’s required in their country, but not here. She blasted the whole thing in a statement on Twitter:

“Protests are sweeping Iran & women are burning their hijabs after the death last week of Mahsa Amini, following her arrest by the “morality police”. Human rights groups say at least 8 have been killed. Last night, I planned to ask President Raisi about all this and much more.

This was going to be President Raisi’s first ever interview on US soil, during his visit to NY for UNGA. After weeks of planning and eight hours of setting up translation equipment, lights and cameras, we were ready. But no sign of President Raisi.

40 minutes after the interview had been due to start, an aide came over. The president, he said, was suggesting I wear a headscarf, because it’s the holy months of Muharram and Safar.

I politely declined. We are in New York, where there is no law or tradition regarding headscarves. I pointed out that no previous Iranian president has required this when I have interviewed them outside Iran.

The aide made it clear that the interview would not happen if I did not wear a headscarf. He said it was “a matter of respect,” and referred to “the situation in Iran” – alluding to the protests sweeping the country.

Again, I said that I couldn’t agree to this unprecedented and unexpected condition. And so we walked away. The interview didn’t happen. As protests continue in Iran and people are being killed, it would have been an important moment to speak with President Raisi.”

And so we walked away. The interview didn’t happen. As protests continue in Iran and people are being killed, it would have been an important moment to speak with President Raisi. 7/7 pic.twitter.com/kMFyQY99Zh

Iran is being rocked right now under mass protests following the death of a young girl who was reportedly beaten to death by these ‘morality’ police. In my opinion, President Ebrahim Raisi was looking for some solidarity from the US. In the interview with CNN Amanpour said it was the UN and producers who asked her to wear the headscarf which I don’t doubt they understand how that would look, given the current climate in Iran.

The left has this push right now where they are whitewashing phrases like ‘terrorists’ and it’s a dangerous notion to pretend like the US does not have enemies. It would be even more dangerous for the American people to try an align the US with tyrannical governments. I’m glad that Amanpour walked out. It’s probably also a good thing that she put it out on social media before her network could act against her.