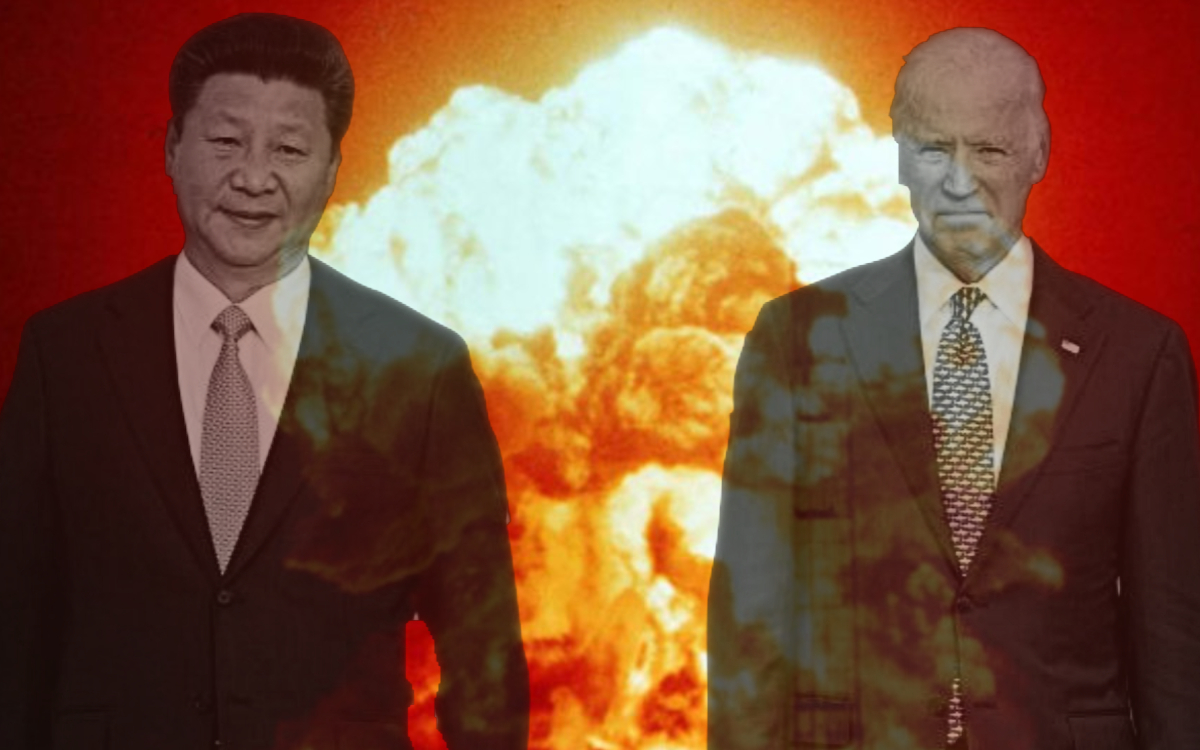 There is a video that has made the rounds on some social media platforms and has been spreading throughout the Communist Chinese Party (Chi-Coms) with a message from the regime of mainland China that threatens to release a “continuous” nuclear war on the world.

This never would have happened under President Donald Trump. President House Plant Biden is not a deterrent to anyone let alone a repressive regime that has a goal of taking down the United States as the world’s leading economic superpower.

Biden is on record saying that China is not a threat to the US. He has been wrong on every major foreign policy issue that he’s ever chimed in on, according to Robert Gates, the Secretary of Defense for the Obama administration. “I think he has been wrong on nearly every major foreign policy and national security issue over the past four decades,” Gates said.

“When we liberate Taiwan, if Japan dares to intervene by force, even if it only deploys one soldier, one plane and one ship, we will not only return reciprocal fire but also start a full-scale war against Japan,” the video message threatens. For those not in the know, that is a threat to the United States as well as the US has an agreement to defend Japan.

“We will use nuclear bombs continuously until Japan declares unconditional surrender for the second time. What we want to target is Japan’s ability to endure a war. As long as Japan realizes that it cannot afford to pay the price of war, it will not dare to rashly send troops to the Taiwan Strait.

“In 1964, when our first atomic bomb was successfully detonated, we promised the world that we would not use atomic bombs against non-nuclear countries and that we would not be the first to use them. Nearly 60 years have passed. Although the strength of our nuclear deterrent has been somewhat affected this decision has been a success, and has safeguarded our peace when we built our country.”

#CCP Vows to Nuke #Japan if Japan defends #Taiwan. As Japan is the only country that has been nuked, so nuking Japan "will get twice the result with half the effort."
中共軍事頻道威脅對日本實施連續核打擊，直到日本第二次無條件投降。 pic.twitter.com/dp45R2LXtD

But they built the modern-day China based on lies, theft of intellectual property, coercion, manipulation of currency, ransomeware attacks, and forced technology transfer, aided by weak politicians in the West.

The video went on to warn of what they consider is the international situation that the Chi-Coms are saying is changing and “our country is in the midst of a major change that has not been seen in a century and all political policies, tactics and strategies must be adjusted and changed in the midst of such a major change.”

It makes you wonder if the American corporations and sports celebrities who have made fortunes dealing in China, all of whom have looked the other way when it comes to China as a bad actor on the world stage, will take the side of the United States or their Chinese benefactor if it comes down to war. We may soon find out if they support America or if they plan to continue to be slaves to the Chi-Com money. After this threat, right now is the time they should be making that decision.

This is happening at a time when Joe Biden has weakened our military forces by pushing things like critical race theory among the ranks and accepting transgenders, things that regardless of your political ideology must be recognized as demoralizing the troops and killing the morale of men and women who did not sign up to be lectured to by woke commanders about how they are the problem in the world. It weakens the ability to be the best fighting force on the planet. The military is so vital to our country’s freedom that to attack it in the ways the Biden administration has already done should be a crime.

The US military is not a social club. It is supposed to kill people and break things. It is not supposed to be used to push Marxist critical theories and false gender science on the troops. That makes us less safe, less secure. The Biden administration has been a national security threat for what they have done to our military. And it’s exactly what the Chi-Coms hoped for.

The video threatens, “In order to protect the peaceful rise of our country, it is necessary to make limited adjustments to our nuclear policy. We solemnly put forward the ‘Japan exception theory.’ In modern history Japan has taken the initiative to harm the Chinese people many times, including the first Sino-Japanese war in 1894-1895, when it took over Taiwan and made us pay more than 230 million taels of silver in reparations. And the world invasion of China of 1931-1945, when more than 35 million Chinese were killed and wounded.”

The Chi-Coms accuse Japan of failing to be serious about acknowledging atrocities and “if Japan goes to war with China for the third time, the Chinese people will take revenge on the old and the new scores.”

The US Sun did a report where they point out that the China threat comes on “the eve of the Olympics.”

“It comes after earlier this month, China vowed to invade Taiwan and explained how it would do it,” the report said. “An article in a state-controlled publication offered a glimpse of a terrifying three-stage plan to pave the way for an invasion force to storm the breakaway island. President Xi Jinping pledged a ‘complete reunification’ with Taiwan as he delivered a speech to mark 100 years of the Chinese Communist party.”

This Chi-Com threat has worldwide implications. Any invasion or in fact any other military actions could escalate hostilities and “could drag in the U.S. through its pact to defend Taiwan,” the US Sun piece said. South Korea, Australia, and even NATO forces like the UK could also be drawn in since the US is an alliance member.

The video has been removed from some platforms. We don’t yet know if the Chi-Coms removed it or the platforms did so.

According to the Sun, Japanese Deputy Prime Minister Taro Aso has asserted, “We must defend Taiwan, under our alliance with the U.S.”

The video ends by stating: “There will be no peace talks.”

Who says the world’s tyrants don’t pay attention to what’s going on in the United States and take advantage when opportunities arise? The American Marxists have weakened our country from within, divided the American people more than at any time in my lifetime, and have taken the wealth of our nation and a renewed military both generated under the previous administration and wrecked it in under a year. Can we rely on the current crop of Marxist lunatics who are running our federal government at a time when the world has just been threatened with nuclear strikes?