In an attempt to steer the narrative, Black Lives Matter created a poll on Twitter about Trump.  However, the poll showed overwhelming approval for the president almost immediately.  Needless to say, the group removed it.

The poll was initially posted on November 15.  Then, it was taken down almost immediately.

And it didn’t even happen once.  Clearly, the group assumed its audience would disapprove of Trump, but that didn’t happen.

Black Lives Matter posted and removed the poll three separate times when it showed overwhelming approval for Trump.  Various Twitter users grabbed screenshots of the poll before it was taken down.

Since @realDonaldTrump bragged about the results of a Twitter poll, let’s try this again!

Do you approve or disapprove of President Trump’s job performance?  Do vote and retweet. 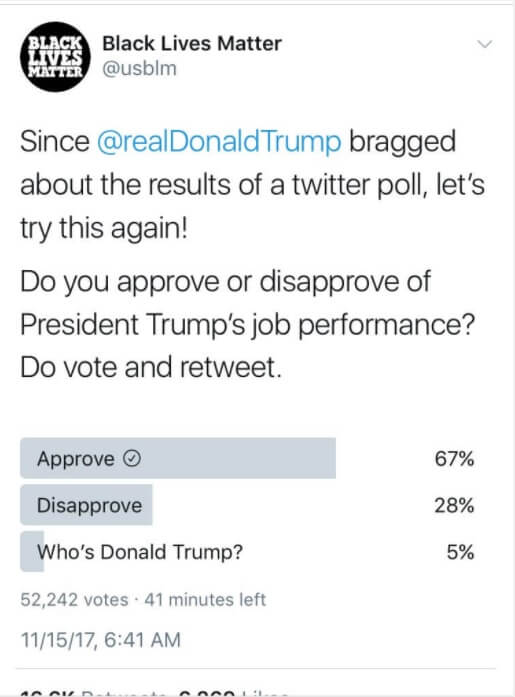 When the poll started inching to almost 70%, the group took it down.  As one user said:

The confusion didn’t stop there.  Because the poll had been deleted and re-added so many times, users were left utterly confused.

AND now I can't find the actual poll to vote on. That's even funnier. Guess when you don't get the result you want you improvise. 😂😂😂😂

Most likely, conservatives definitely trolled the Black Lives Matter poll.  However, it’s a good lesson that liberal groups cannot control the narrative.  When they can’t, they refuse to take any criticism whatsoever.

And hey, while we’re talking about polls, let’s talk about the average American’s view of the movement.  Back in August, The Hill discovered that 57% of Americans disapproved of Black Lives Matter.

The public is sympathetic to the problem of police using too much force but overall are unsympathetic to the Black Lives Matter movement.  As you might expect, white voters are sharply negative to the group while African-Americans give them positive ratings.

Overall, the United States disapproves of Black Lives Matter.  Unfortunately, it looks like the group can’t say the same about President Trump.