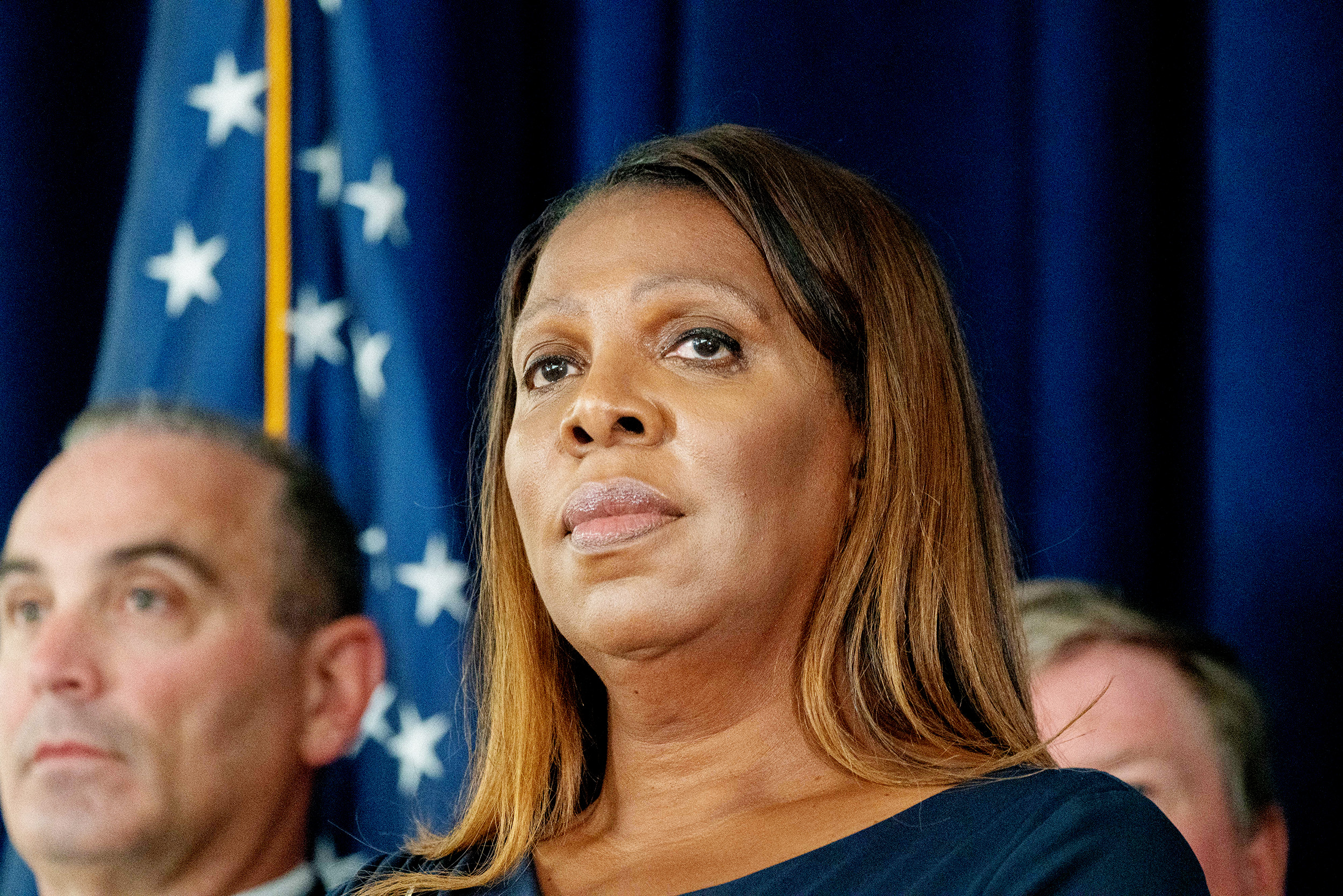 NEW YORK, NEW YORK - SEPTEMBER 08: New York State Attorney General Letitia James speaks during a press conference after Steve Bannon, former advisor to former President Donald Trump surrendered at the NY District Attorney's office to face charges on September 08, 2022 in New York City. Bannon faces a new criminal indictment that will mirror the federal case in which he was pardoned by former President Donald Trump. He and others have been alleged to have defrauded contributors to a private $25 million fundraising effort to build a wall along the U.S.-Mexico border according. (Photo by David Dee Delgado/Getty Images)
FacebookTwitter

Ever since Letitia James became the Attorney General of New York, she has made profanity-laden rants about how she is going to get President Trump. She has been hindered in her quest by two things. Her lack of gray matter and the fact that President Trump refuses to break the law.

So, why is she really bringing this lawsuit at this time? Could it be because according to the polls, she is losing in her bid for reelection to the Republican candidate?

When a Republican wins a statewide office in New York, you know the Democrat has to be extremely unpopular. James was running for governor, but she was unable to get any support and was forced to withdraw from the race. If she loses this election, she is probably dead politically. This is an act of desperation.

The suit alleges years of fraud, seeks to bar Trump from ever doing business in New York again and seeks $250 Million in penalties. pic.twitter.com/yFEBRyumHe

James is taking a shotgun approach to this lawsuit and has named many co-defendants such as Donald Trump Jr., Eric Trump, Ivanka Trump, Allen Weisselberg, Jeffrey McConney, The Donald J. Trump Revocable Trust, The Trump Organization, Inc., and others. But, her lawsuit and it’s accusations are only being made against the actions of President Trump personally, and even if true (It’s not) no one else would be responsible. Also, realize that Trump made good on each and every loan, so where does the fraud come in?

Former Attorney General Bill Barr, no fan of Donald Trump has weighed in and basically eviscerates James for what he calls a political hit job:

“It’s hard for me not to conclude it’s a political hit job. And this is a woman who campaigned for office saying that — promising she was going to go after Trump, which I think is a tremendous abuse of office to go head-hunting and targeting individuals. So, I think she was targeting Trump. And this is, after three years, a civil lawsuit, the gist of which is that, when the Trump Organization borrowed money, Trump personally guaranteed those loans.”

“And to support that, she’s claiming that he inflated his assets on his financial statements. Now, I’m not even sure she has a good case against Trump himself. But what ultimately persuades me that this is a political hit job is, she grossly overreaches when she tries to drag the children into this. Yes, they had roles in the business, but this was his personal financial statement. It was prepared by the CFO. Accounting firms were involved in it. The children aren’t going to know the details of that and be able — and nor are they expected in the real world to do their own due diligence and have it reviewed independently.”

“And so this — this, to me, looks like gross overreach, which I think is going to end up backfiring on them, because I think it will make people sympathetic for Trump, that this is another example of people piling on because of Trump Derangement Syndrome, this strong desire to punish him.”

Bill Barr on NY AG's lawsuit: "This is a political hit job. I think it's gonna back firing on them. For Trump this is another example of people piling on because of TDS." pic.twitter.com/TUZGsg8gQz

Will James’ ploy work? I doubt it. The reason she is behind in the polls is because she is eating large chunks of manpower and money in pursuit of Trump even as she is taking away assets from fighting crime in a state that is seeing crime explode. She is even trying to get the DOJ to go after Trump criminally. Not even garland will go after Trump when he has so little chance of success. On that sinking ship, only one rat remains.

I wonder if President Trump and the other defendants could sue New York over this malicious prosecution.It would be a shame if the taxpayers would have to foot the bill for political action by James.

Unlike other politicians such as Mitch McConnell, Nancy Pelosi, Liz Cheney, and the Obamas have gotten very rich from holding office, President Trump lost $2 billion in net worth while fighting for you and me.