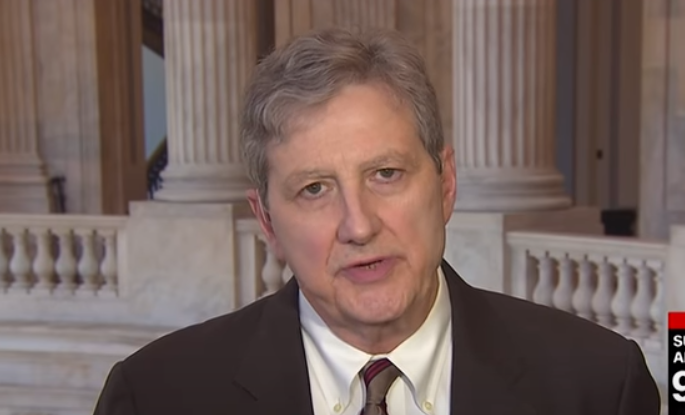 Senator John Kennedy [LA-R] has dropped some hilariously accurate folksie comparisons over the years but his recent description of Biden has to be my new favorite. “Biden is like an old Buick, Some days he starts, and other days he doesn’t”, Kennedy explained of the deeply diminished Biden.

“Well, President Biden is clearly struggling. He struggled today in the Middle East and I take no joy in that. I trust the American people, and I think the American people have figured things out. I don’t consider myself an expert in too many things, if any, but I know how to read a poll. A majority of Americans, to them, the president is about as popular as cholera. The American people did not reach this conclusion this morning. They have reasons for believing that. Number one, the majority of Americans don’t believe that President Biden is in charge.

They think the president is not the president. They think that the real president is whoever controls the teleprompter. Number two, fair or unfair: the majority of Americans think that President Biden is too old. Kind of like an old Buick. Some days he starts, and other days he doesn’t. Number three, a majority of Americans think that the people President Biden has appointed to run his government – are deeply weird. And, they are. Many of these appointees, they curl up in a protective ball if you use the wrong pronoun. They pride themselves on not prosecuting criminals. Their executive skills extend no further than ordering a pizza.”

Biden’s also delusional. Democrats have made it clear they don’t want him to run, but according to the groomer-in-cheif, that’s misinformation:

“They want me to run,” Biden said Tuesday evening when asked by a reporter, toward the end of the White House Congressional Picnic, for his message to Democrats who don’t want him to run for reelection.

Just so we are clear, reports that Democrats don’t want Biden to run isn’t conservative news. Just look at this snippet from CNBC:

“Just 26% of Democrats said they would prefer President Joe Biden to be their party’s candidate in the 2024 election, and 64% want someone else heading the ticket, a new poll found.

Biden’s age and job performance were the top reasons cited by Democrats why they wanted a candidate other than Biden to be the party nominee, The New York Times/Siena College poll found.

Just 13% of voters of all kinds say the United States is “on the right track,” while 77% said it was “headed in the wrong direction.”