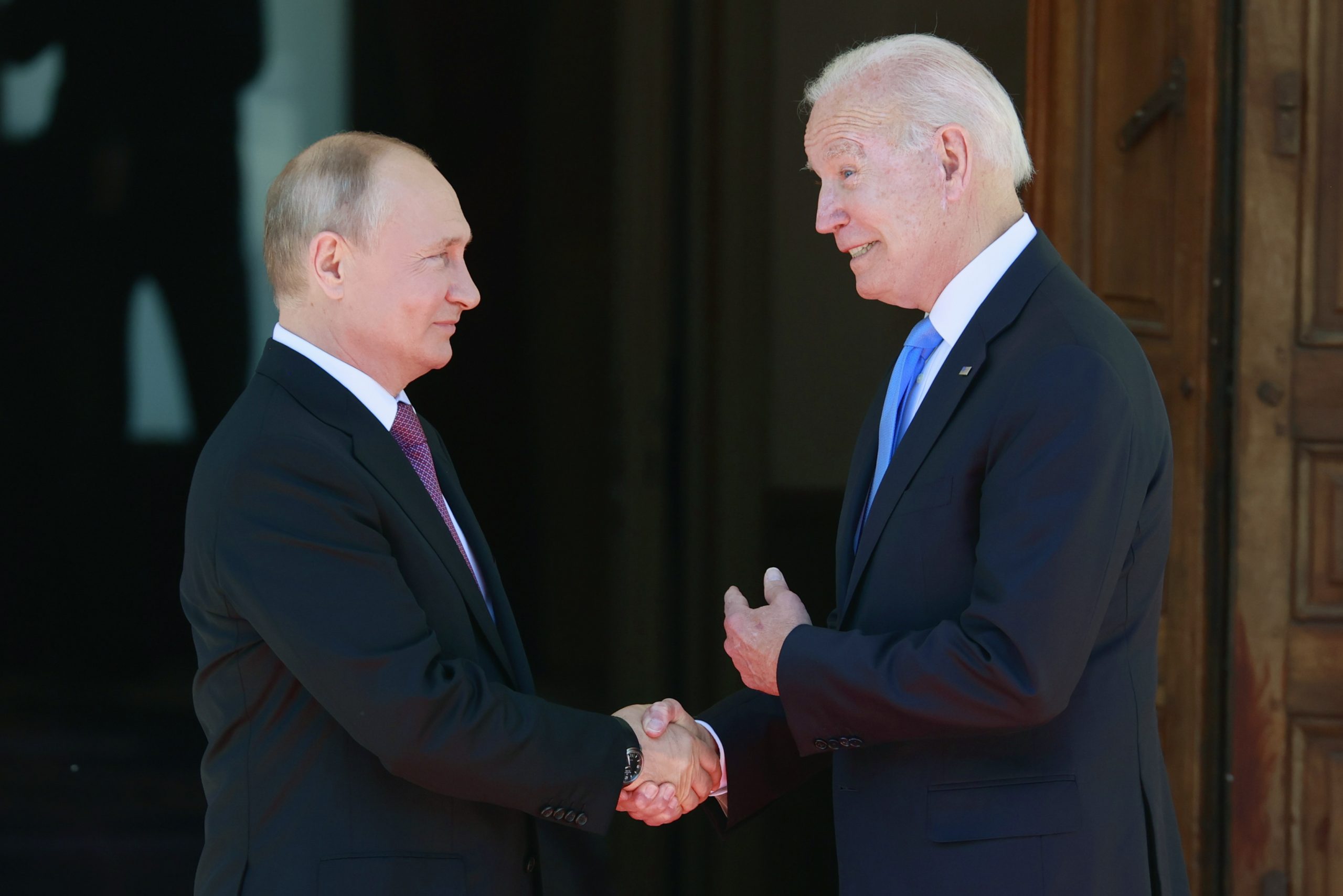 While President Joe Biden had a summit meeting with Russian President Vladimir Putin on Wednesday in Switzerland, he appeared to be holding one of his famous cheat sheets to get him through the meeting.

Biden seemed to be hiding his notes from Putin while they sat on opposite sides of a small table inside the historic Villa La Grange in Geneva, The Sun reported. After close to 50 years in politics, our President House Plant doesn’t know that the world is able to watch him sneak peeks at the index card filled with answers to questions that may come up during the summit. Yeah, Putin, a former KBG agent, would never figure it out. #EyeRoll

While the setting was being video recorded, Biden could be seen sneaking a peek at the paper in his hand prior to sliding it into the pocket of his suit jacket.

Biden, 78, sat up straight in his chair with crossed legs, while Putin, 68, sat slumped with his feet planted wide and his hands on his thighs. A body language expert would tell you that Biden was afraid of screwing something up while Putin felt relaxed like he was in control. The legs spread wide means you’re not afraid at the moment.

Both Biden and Putin barely made eye contact during introductory remarks.

There was some chaos going on when American reporters clashed with Russian security personnel. It became loud enough that Biden’s comments, which we believe included Biden saying that the US and Russia are “two great powers.” It came out sounding like “bezellbeef mobin toffie, come on man,” and sycophantic reporters praised Biden for not appearing like an old drunk looking for the bathroom.

The reason Putin had the security detail kick the American reporters out was a power move because the number of reporters was already agreed upon prior to the meeting. Come on, man.

At one point Biden was asked by a reporter if he trusted Putin, to which he nodded his head. Kate Bedingfield, the White House communications director almost immediately walked it back on social media.

“It was a chaotic scrum with reporters shouting over each other. @POTUS was very clearly not responding to any one question, but nodding in acknowledgment to the press generally. He said just two days ago in his presser: ‘verify, then trust.'”

It was a chaotic scrum with reporters shouting over each other. @POTUS was very clearly not responding to any one question, but nodding in acknowledgment to the press generally. He said just two days ago in his presser: “verify, then trust.” https://t.co/5C9gP4XTtO

What’s amazing is that we have reporters saying from this summit that Biden has handled foreign affairs so much better than Donald Trump ever did, yet Trump never had to have people walk back statements he made and he knows the difference between Syria and Libya. In fact, Trump never forgot where he was. Even Obama’s secretary of defense Robert Gates said that Joe Biden has been wrong on every foreign policy issue he ever chimed in on. He was asked at a later point in time during an interview if he still meant what he wrote in his book and he doubled down saying yes, Joe Biden was wrong on every foreign affairs issue. And yet, reporters constantly kiss Biden’s rear end praising him for his foreign policy acumen.

As more proof that Biden is not in control, he seemed to be confused about if he should field some questions when he turned to Secretary of State Antony Blinken and asked, “I’m not sure how this will work. One at a time?”

At one point, Biden also appeared confused about whether he would be fielding questions, asking Secretary of State Antony Blinken, “I’m not sure how this will work. One at a time?”

It’s not clear what Biden’s notes on the paper said, but I have caught him in the past holding a paper chart created for him with the names and faces of reporters, what network they worked for, and whether to call on them. The names were marked with numbers showing in which order he planned to call on them during his first press conference back in March.

Even though Biden had talking points, he still made the mistake of saying that the United States ranked 85th in the world for the quality of our infrastructure before he had to correct himself saying we rank 13th.

Remember when the Fake News media went completely bonkers when President Trump didn’t sucker punch Putin in the face the minute they met for their summit? They didn’t have such inclinations for Biden. They just felt lucky he knew who Putin was.