An Arizona man is recovering after being hit in the face with a brick for daring to wear his Make America Great hat in public.

As the midterm elections draw near, expect more of this unprovoked violence to erupt against Patriots for simply showing support for secure borders, a strong economy and Conservative values.

A man by the name of Darrell Knapp is recovering in Mesa, Arizona today after having his mouth wired shut and suffering severe trauma.

“So my buddy was smashed in the face by a brick that was thrown at him at the bar for what he was wearing.

Yes he was wearing a MAGA hat, but that’s no reason for someone to attempt murder.

He has medical bills to cover, and the guy ran as soon as he chucked the brick.

He now has his jaw wired shut, that’s as far as he can open it, can’t even fit a straw in for his liquid diet, which is already going to be a challenge with the hole in his cheek.

If you can help out, it’s much appreciated.

This happened in Arizona, so just think, it can happen to anyone anywhere.” 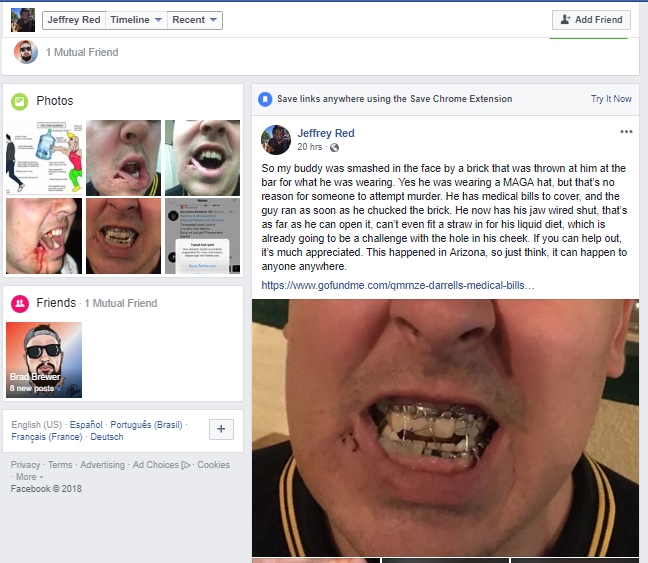 That’s when the haters began to pile on on facebook. Take a look at some of the sick responses after Jeffrey Red asked for help via a gofundme page was set up:

Anna Abney Maybe next time he won’t support candidates who want to take away our access to health care.

And it got worse. See for yourself: https://bit.ly/2N39jwp

If you would like to help pay for medical bills, please go here: https://www.gofundme.com/qmrnze-darrells-medical-bills