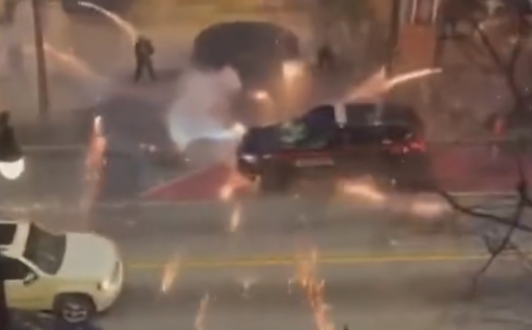 Last Saturday, Atlanta saw the most violent protests since the death of 26-year-old Manuel Esteban Paez Teran earlier in the week. In response to a call for a “Night of Rage” by Antifa members, a large crowd of angry protesters took to the streets, smashing windows and torching a police car.

Police Chief Darin Schierbaum reported that some protesters had explosives on them, and one of the devices was used to set an Atlanta Police car ablaze. At least six people were arrested and three businesses were damaged.

The protests have been linked to the building of the Atlanta Public Safety Training Center, which is to be built by the Atlanta Police Foundation. Activists are concerned about the environmental impact of the project’s tree-cutting and the potential of militarization of the police force.

🚨#BREAKING: Violent protests have been reported in Atlanta

Violent protests have erupted tonight in Atlanta after police killed a man on the 18th. There are reports of police cruisers on fire and rocks being thrown as activists call for a “Night of Rage”. pic.twitter.com/qKTc20g79n

Governor Brian Kemp condemned the protesters’ actions, tweeting “Violence and unlawful destruction of property are not acts of protest. They are crimes that will not be tolerated in Georgia and will be prosecuted fully.”

The “Stop Cop City” organization, who maintain that they are peaceful protesters, released a statement claiming that the destruction of property was a response to the shady nonprofit that funnels weapons and military gear into the city.

🚨#UPDATE: Police say six people were arrested after a small group within the crowd damaged two police vehicles and 3 businesses downtown. the unrest started when an activist was killed after firing a gun at police while protesting a new training site.https://t.co/MmHb8nPWlx

Law enforcement has not identified the protesters and the charges have not been released. Atlanta Mayor Andre Dickens confirmed that some of the protesters were neither residents of Atlanta nor the state of Georgia.

I just want to take a moment to address the ridiculous irony here; the left wants police to be ‘retrained’. Atlanta set plans for a training facility to do just that which led to the protest and shooting of the activist suspect.

I’m making 80 US dollars for every hr. to finish some internet providers from home. I absolutely never thought it would try and be reachable anyway. My comrade mate got $13k just in about a month effectively doing this best task and furthermore she persuaded me to profit. Look at additional subtleties going
to this article.. https://needpeopleNYC.blogspot.com

I’m paid $185 per hour to complete the task using an Apple laptop. I absolutely didn’t think it was conceivable, but my dependable buddy convinced me to give this straightforward an03 chance a go after she made $26,547 in just 4 weeks working on it. Visit the following page to find out additional
.
.
instructions—————————>>> 𝐚𝐩𝐩𝐫𝐢𝐜𝐡𝐛𝐚𝐛𝐚.𝐛𝐥𝐨𝐠𝐬𝐩𝐨𝐭.𝐜𝐨𝐦

Google paying an amazing earnings from home $4500 to $6000 a week, that is incredible a yr in the past I become unemployed in a b25 horrible economy. Thanks Google each day for blessing those commands and now it’s miles my responsibility to pay and proportion it with everyone ..
right here i started … http://goodpayments12.blogspot.com

Scam scam every where but don’t worry , every one is not a cheater, very reliable and profitable site. Thousands peoples are making ng04 good earning from it. For further detail visit the link no instant money
.
.
required free signup and information———————->>> https://net.pay1.workers.dev

Please come to towns like ours. I could use the exercise.
Black Lies Don’t Matter
No Free Speech for Communists, DemocraCommies and their WOKE-ss punk terrorists!
Your turtle kicking won’t save you, this time.