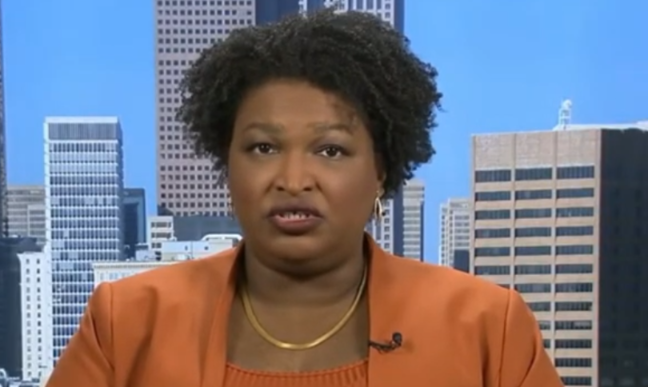 Failed Georgia Democrat Stacey Abrams was caught lying after she denied in front of a live audience that she did not deny the results of the Georgia elections after her epic loss to incumbent Governor Brian Kemp. The cast of The View laid the framework after Republicans knocked the Democrats for their blatant hypocrisy.

Just like many other politicians, Trump rebuked the results of the 2020 elections and his questioning was not unfounded but Democrats painted him as ‘unhinged’ for trying to exercise his right to a recount. Abram’s did the exact same thing.

Now Abrams claims that her ‘victory claims’ were in regards to some ‘moral’ victory and not an actual dispute against election results.

…many Republicans still associate her with her refusal to concede defeat to Mr. Kemp in that race. Ms. Abrams has repeatedly defended that decision, particularly against those who say it was no different from efforts by former President Donald J. Trump and his allies to overturn Mr. Biden’s victory in 2020.

Sunny Hostin. Hostin introduced the subject of the 2018 election by saying, “When you lost in 2018, you didn’t traditionally concede which I appreciate because you cited voter suppression.”

Abrams responds to that carefully set up question by claiming she was only claiming a moral victory. “There’s this clip that’s going around and it shows me saying that we won. What I was referring to was that we won in terms of communities that were long left out of the electoral process finally participating in ’18 in outstanding numbers.”

But that’s not what Abrams told NewYorkTimes. The failed wanna-be politician wasn’t simply claiming the moral high ground as she now claims on The View. Don’t believe me? Read it for yourself…

Ladies and gents, the receipt:

“I saw that recently you said something like you’d won your election but you just didn’t get to have the job. Yes.

Is there any fear on your part that using that kind of language fans the same flames that President Trump has fanned about delegitimizing our elections? I see those as very different. Trump is alleging voter fraud, which suggests that people were trying to vote more than once. Trump offers no empirical evidence to meet his claims. I make my claims based on empirical evidence, on a demonstrated pattern of behavior that began with the fact that the person I was dealing with was running the election. If you look at my immediate reaction after the election, I refused to concede. It was largely because I could not prove what had happened, but I knew from the calls that we got that something happened. Now, I cannot say that everybody who tried to cast a ballot would’ve voted for me, but if you look at the totality of the information, it is sufficient to demonstrate that so many people were disenfranchised and disengaged by the very act of the person who won the election that I feel comfortable now saying, “I won.” My larger point is, look, I won because we transformed the electorate, we turned out people who had never voted, we outmatched every Democrat in Georgia history.”

Of course, faux "conservative" Alyssa Farah Griffin rolls over and doesn't push back on Abrams' BIE LIE about not denying the results in 2018.
"Thank you for admitting outright you didn't win. That's such a rare thing," she cooed. pic.twitter.com/MjX46nU9IQ

Folks, it’s important to call it out when you see it. Democrats have a tendency of somewhat successfully re-writing history—At least for their voters. Don’t believe me? Ask a Hillary supporter if her server contained top-secret documents.